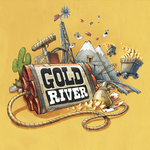 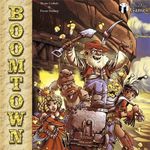 • Gold River is a revamped version of Boomtown / La Fièvre de l'Or from designers Bruno Faidutti and Bruno Cathala and publisher Lumberjacks Studio, which is launching a new "Coffee Break" line of games with this January 24, 2020 release.

Here's an overview of the game for those not familiar with the original design:
Quote:
In Gold River, players want to take home as much money as possible from the mines that surround them.

On a turn, multiple items — mines, dynamite, town characters, and more — will be available for auction. Players keep bidding until all but one player passes; that player pays their bid to the player on their right, who keeps half the money (rounded up), then passes the rest right, with that player keeping half, and so on. The winning bidder chooses one item from the lot, then the player to their left chooses one, and so on until each player has acquired something new.

The winning bidder also rolls two dice to determine which gold mines pay out. The first player to acquire two mines in a location becomes that town's Mayor, after which they earn a commission when anyone else acquires a card from that town.

• The second title in Lumberjacks' "Coffee Break" line is Monster Cafe from Romain Caterdjian and Théo Rivière, with this game debuting on February 14, 2020 ahead of the FIJ 2020 game fair in Cannes, France. Here's a summary of gameplay:
Quote:
Humans can't get served in Monster Cafe, so you'll need to choose the right monsters to approach the counter in order to get the coffee you want.

To start play, choose the five monster families that you want to use in the game from the twelve available, then shuffle those cards. Each player receives a hand of ten monster cards (twelve with two players), then chooses three of these cards to place face down to form their "back line". All of the other monsters form a face-up front line.

On a turn, a player chooses one of their face-up front line monsters, moves it to the center of the table, then triggers its power. As soon as each player has only three monsters in their front line, the round ends and players distribute coffee tokens. Whoever has the most monsters of a particular family, with back-line monsters counting double, earns coffee tokens equal to the number of monsters of this family in the center of the table.

After multiple rounds, whoever has collected the most coffee wins!

• The third "Coffee Break" title is Magic Rabbit, which is due out in June 2020 and which has only this promotional image available for now: 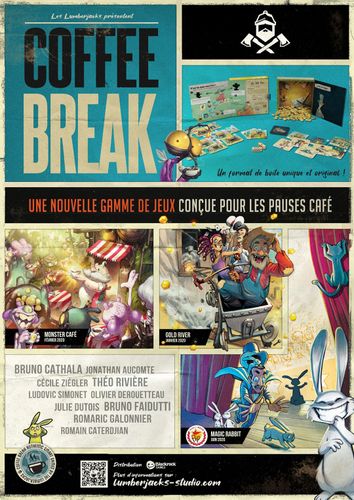 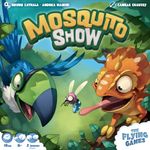 • Another Cathala title that will be available at FIJ 2020, albeit probably only in demo form, is Mosquito Show, a co-design with Andrea Mainini from The Flying Games that fits into the category of tactical two-player games that have appeared previously from Cathala and The Flying Games: Jurassic Snack, Ice Team. Here's the challenge in this design:
Quote:
Mosquito Show is a tactical two-player game, with each player controlling a toucan and a chameleon. The game board is a 4x4 grid, with a stack of three mosquito tokens placed at the nine internal intersections of this grid.

On a turn, a player moves either their toucan or chameleon. To move the chameleon, you first eat one of the mosquitoes sitting on a corner of its current space, then move it one square orthogonally. To move the toucan, you move it diagonally from one square to another, eating the top mosquito that you pass over; the toucan can move more than one space in a single movement, but you must be able to eat from each corner space that you cross. If you cannot feed one of your animals, then you can't move it. If you can't feed either of them, then you lose the game.

If you eat nine yellow mosquitoes, you win the game instantly. The game also has mosquitoes of other colors that have special powers: move one mosquito, move one of your animals, force the opponent to play with a particular animal, etc. 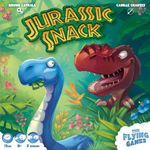 • Speaking of Jurassic Snack, at FIJ 2020 Cathala and The Flying Games will demo Jurassic Snack II, a design with gameplay similar to that first game, but with players now controlling Triceratops and a single Raptor.

Whereas each title is a standalone two-player game, they can also be combined to create a four-player game played in teams of two.