New Game Round-up: Drafting Through the Ages in Genesia, and Fighting Bosses in Paris 1889

• In March 2019, I gave brief descriptions of two future releases from French publisher Super Meeple. One of those titles, Reiner Knizia's Tajuto, debuted at SPIEL '19, and I've posted a written and recorded overview of that game.

The other title — Genesia from Eric Labouze — was described as a Q3 2019 release and bore only the briefest of descriptions: "a quick-playing, card-drafting civilization game". I've now been able to check out the rules of this FIJ 2020 release, and I offer this summary of a game that despite its brief playing time seems like it could be heavy on expansion and non-random conflict along the lines of a Barony or Inis:
Quote:
Genesia is a quick-playing game of placement and civilization that includes a card-drafting system and a lot of interaction between players.

In more detail, the game is played over three ages, which roughly correspond to ancient times, medieval times, and the modern era. At the start of each age, players receive six cards from that age, then draft a hand of five cards for use in the current age. Each age has four phases — growth, expansion, attack, end — and the cards include icons that show when they can be played and when their powers take effect. You also receive 15 coins at the start of an age. Within each phase, players take all the actions they want in player order, eventually passing, and once all players have passed, the next phase begins. At any time during your turn, you can discard a card from your hand and take 4 coins from the reserve. The phases are:

• Growth: Play cards that show this phase's icon (paying their cost, if required) and recruit as many clans as you wish, paying 2 coins for each and placing it in your homeland or (in later ages) in one of your cities. Each player has their own game board, with all player boards surrounding a shared "Genesia" board. 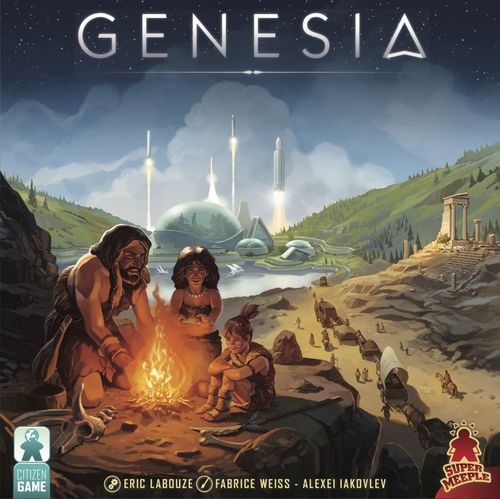 • Expansion: As before, play cards with the proper icon, recruit clans for 2 coins each, or move your clans as much as you wish, paying 1 coin for each space than an individual clan moves (although in age III you can move a stack of clan tokens for 1 coin per space); when moving, you can pass through occupied regions, paying that player an additional toll of 1 coin, but you cannot stop on those regions, except for a player's homeland, which can house any number of clans from any number of players.

• Attack: Simultaneously reveal your war/peace token with all other players. If everyone has chosen peace, this phase ends; otherwise, each player who has chosen war performs exactly one attack, choosing a region that contains your clans and an adjacent region controlled by an opponent that contains fewer clans. Choose a number from 1 up to the number of clans in your attacking region, then remove that many clans from each region. If the defending region has a city and no more clans, you can remove one of your clans to besiege the city and replace it with one of your own. If the opponent has now been removed from that region, you can move any number of clans from the attacking region to this space.

Once each "war" player has attacked once, players once again simultaneously reveal their war/peace token, repeating the process above until all players reveal peace.

• End: If you have at least two clans in a region without a city, you now place one of your cities in that region. Then you play any cards you wish with an "End of Age" icon, discarding all other cards for 4 coins each. Score progress points for this round's "End of Age" cards as well as all invention cards you've played to date.

After three ages, you sum progress points, score 2 points for each region on a foreign continent you occupy, score points for every region you occupy (1-15, with the central Genesia regions being most valuable), and score points if you achieved your secret objective. Whoever scored the most total points wins!

• Another title being shown in Cannes at FIJ 2020, albeit not available for purchase, is Demeter from Matthieu Verdier, who works for publisher Sorry We Are French (SWAF). Demeter is a standalone flip-and-write game that features the same graphic style and is set in the same universe as the publisher's earlier game Ganymede.

• At FIJ 2020, SWAF will also be demoing Paris 1889, a sequel of sorts to designer Florian Fay's Greenville 1989. Here's an overview of this design:
Quote:
Paris 1889 is a co-operative narrative game, a follow-up to Greenville 1989 in which each player represents a character who has survived the supernatural events of Greenville and decides, ten years later, to investigate further by going back in time to find and hopefully close the gate to the monsters' realm. With illustrated cards, they must describe these events to their fellow players, who must then locate this character and plan actions. This lead role changes each round, giving everyone the chance to be step up. The game concludes with a Boss battle.

• To follow up on news from Jan. 10, 2020, Riot Games has dropped a few lines about its second outing into the world of tabletop games:
Quote:
Tellstones: King's Gambit is a bluffing game with perfect information for two or four players

Variants of Tellstones are played throughout Runeterra, the world of the League of Legends card game, with this being a Demacian variant.
In a note announcing the founding of Riot Tabletop, the developers write, "Our first tabletop game [2016's Mechs vs. Minions] was a huge, cooperative game loaded with miniatures and narrative content. Our second game is competitive, much smaller, and plays faster. They're worlds apart..."