I thought I might finally get through all of the tweets about Japanese games that I sent myself in 2019, but I did not. Soon! Then I can get to those still waiting from 2018 — or not. We'll see.

• In a report on the May 2019 Tokyo Game Market, Japanese blogger Sugoroku-Kozo mentions a design project from publishers Arclight and Drosselmeyer & Co. called "Kaiju on the Earth" (カイジュウ・オン・ジ・アース) that will feature Kaiju-themed games from designers Masato Uesugi, Yuji Kaneko, Hisashi Hayashi, and possibly others down the line. 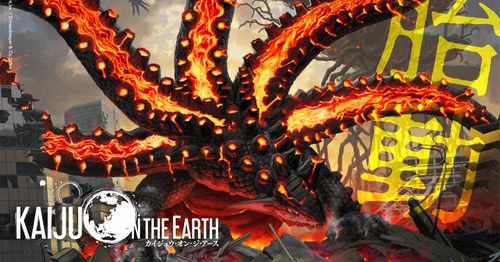 The first title in this series — Vulcanus (ボルカルス) from Masato Uesugi — was crowdfunded on JP site Makuake in November 2019 for retail release in December 2019. Here's an overview of this 2-4 player game:
Quote:
Vulcanus pits one monster player against 1-3 teams of humans, who must co-operate in order to take down the monster.

In more detail, the monster "Volkars" has suddenly appeared from the crater of Mount Fuji, the monster being a ruthless giant that erupts lava from its whole body and that continues to evolve and grow as it creates a path of scorched earth on its way toward Japan's capital, Tokyo. The more casualties you create, the more areas you burn, and the more landmarks you destroy, the closer the monster player is to victory.

The Japanese government has set up a "Monster Disaster Emergency Headquarters", and the human players facing off against Volkars must learn how to repel monsters by evacuating citizens, extinguishing fires, deploying Self-Defense Forces, and conducting investigations. The more research you've conducted, the more options you will have for your strategy, and ultimately you will be able to manage the situation with a direct attack on the monster.

Sometimes the monster can detect the humans' operation and ruin their plans, so will Tokyo perish in the end? Or will the monster fall instead? 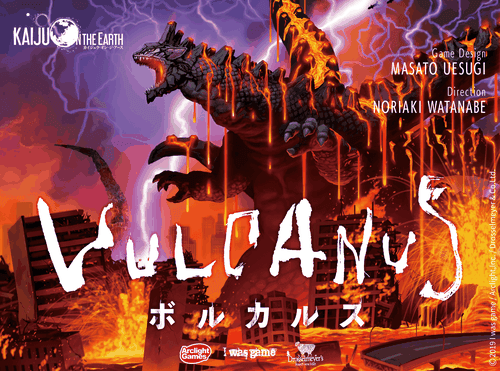 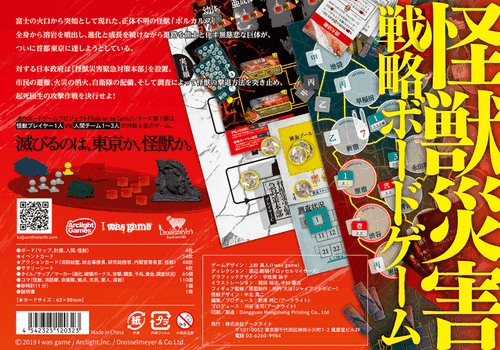 • Designer Reiner Knizia often talks about how he feels pressured to create games before others can steal the ideas from the universe and bring them to reality first. 翡翠の商人 (Jade Merchant) from designer 西村裕 (Hiroshi Nishimura) and publisher スパ帝国 (SPA Game) sounds like one of those would-be Knizia games that ended up in someone else's mind. Here's an overview of this 2-5 player game that debuted in May 2019:
Quote:
Players are the heads of trader caravans who try to accumulate the most valuable goods like gold, spices, and jade. Each round, they have to outbid each other backwards so that the least greedy one may choose the first cards of the current pool; more specifically, each player in turn declares how many cards they want to take, and whoever declares the smallest number takes that many cards. (A player can declare 0.5 less than the number they want to take, and if they do so, they return one card from their hand to the center.) The remaining players then bid for the rest of the cards, with this process repeating until each player takes cards.

Each treasure has its own scoring rules depending on how many you have or how they combine with other cards in your collection. After resolving all cards this way, the player with the highest value of goods wins.

• And here's one for the "should be licensed by someone in the near future" department — SCOUT! from designer Kei Kajino and publisher One More Game!, which resembles 2018's Krass Kariert from Katja Stremmel and AMIGO in that players are playing a climbing trick game of sorts with cards that can't be re-arranged in their hand. In more detail:
Quote:
Cards in SCOUT! are dual-indexed, with different values on each half of the card, with the 45 cards having all possible combinations of the numbers 1-10. During set-up, whoever is shuffling the cards should randomize both the order of the cards in the deck and their orientation. Once each player has been dealt their entire hand of cards, they pick up that hand without rearranging any of the cards; if they wish, they can rotate their entire hand of cards in order to use the values on the other end of each card, but again they cannot rearrange the order of cards in their hand.

On a turn, a player takes one of two actions:

• Play: A player chooses one or more adjacent cards in their hand that have all the same value or that have values in consecutive order (whether ascending or descending), then they play this set of cards to the table. They can do this only if the table is empty (as on the first turn) or the set they're playing is ranked higher than the set currently on the table; a set is higher if it has more cards or has cards of the same value instead of consecutive cards or has a set of the same quantity and type but with higher values. In this latter case when a player overplays another set, the player captures the cards in this previous set and places them face down in front of themselves. 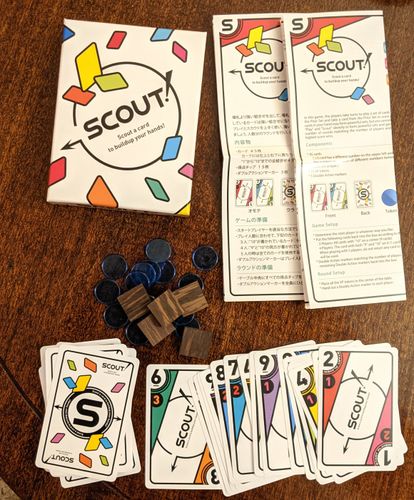 • Scout: A player takes a card from either end of the set currently on the table and places it anywhere they wish in their hand in either orientation. Whoever played this previous set receives a 1 VP token as a reward for playing a set that wasn't beaten.

Once per round, a player can scout, then immediately play.

When a player has emptied their hand of cards or all but one player have scouted instead of playing, the round ends. Players receive 1 VP for each face-down card, then subtract one point for each card in their hand (except if they were the player scouted repeatedly to end the game). Play as many rounds as the number of players, then whoever has the most points wins.