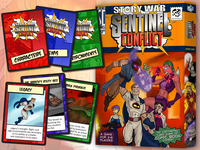 Quote:
At PAX Australia 2013, we got to hang out with Tom from Cantrip Games. Later that year, we had a great PAX Prime with both Tom and Brad, and enjoyed playing their great party game: Story War. We here at Greater Than Games have always been interested in storytelling through playing games, so Story War was the right kind of party game for us!

In the last year, we’ve talked to both Tom and Brad a good deal. They're great guys and made a great game, so it is only natural that a Sentinel Comics version of Story War would be created!

Story War is all about using creativity and humor in impromptu storytelling to defeat your opponents! In Sentinel Conflict, each player will have a hand of Character cards and Item cards, and will use those heroes, villains, devices, and equipment to assemble the best team to take on the other players!
Project by GreaterThanGames

$20 pledge level for the game. Shipping not included - you will be charged for shipping when you pledge based on your location. 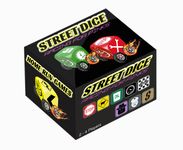 Patron Badge for 2012 through 2017
Street Dice Racing for Pinks

Quote:
Street dice is a fast paced racing game where you race opponents for their pink, aka car title. A race is between 2 players. To qualify for a race you'll need to roll faster than everyone else at the table. Once in the race, beat your opponent to each check point to gain the advantage from the bonus cards.

The dice are high quality D6 plastic dice. To make a game with this number of dice we need to make a significant number of copies to make the costs per unit manageable. We hope by keeping the game as low as we can for kickstarter backers we will be able to produce a larger unit count and bring the game to life. We are targeting a retail price of $29. We will also have some exclusive kickstarter backer content, that will not be available to anyone but backers. More to come as the campaign progresses.
Project by Cobey Pile

$18 pledge level for the game.

Quote:
ZNA is a cooperative survival boardgame that takes place in Boston, in 2025.

The city has been struck by a storm of dark smoke that the inhabitants will later call “the Fog”. This fog destroys everything in its path, leaving behind it a world plunged into chaos. Nobody knows the exact extent of the damage. The Fog concentrates as it settles over the areas it hits, making them dangerous, almost impassable, and infested with threatening mutants.

Indeed, the vast majority of the population seems to have been infected by the Fog. Those who were not killed have been contaminated to the point of transforming into violent and ruthless creatures with superhuman abilities. Their only motivation appears to be the constant hunt of the survivors.

Together, you will progress across the modular game board, searching for equipment, swapping objects with one another, looting chemical storage facilities in order to mix up concoctions for various uses, and most of all, fight the Fog and the mutants it created.

ZNA is designed to offer players a large variety of choices and configurations, with first class-material. Find out the origins of the Fog, what happens to the survivors, and much, much more in 12 original scenarios.
Project by Funforge LLC

$110 early / $125 pledge levels for the game. Shipping costs may apply depending on your location. 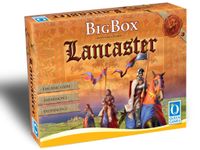 Quote:
In 1413, the new king of England, Henry V of Lancaster, has ambitious plans: The unification of England and the conquest of the French crown!

Each player takes the role of the head of an ambitious aristocratic family. Secure your family's legacy and provide the best support for the young king and become the most powerful Lord of the realm. In Lancaster, if you use your resources strategically and wisely, you can progress from being a simple Lord to being the most powerful ally of the king.

This Kickstarter Edition is exclusive to kickstarter backers!

This edition will not be available in retail, except a german edition. The rest of the print run will be available in small quantities in the shows and for promotion.
Project by Queen Games

$80 early / $82 less early / $90 pledge level for the game and Edo. Check the "Shipping" section of the project description to determine your shipping fee.

Patron Badge for 2012 through 2017
King's Kilt--Whose Clan will reign in Scotland?

Quote:
The game depicts intrigue and treachery among the Scottish clans vying for the crown. Clans ascend the pyramid of cards, rising from the bottom three rows of commoners, through the ranks of noblemen and guardians, until one finally gains the crown and is named King of Scotland. Once a king is crowned, clans can only continue to advance by committing acts of betrayal against their neighbors. Players continue by playing influence cards until everyone has passed, thereby ending the game.
Project by Gryphon and Eagle Games

$9 pledge level plus shipping for the game.

Quote:
The hilarious, cutthroat board game that follows performers as they audition their way to success in musical theatre!
Project by Stephen Turner

$35 pledge level for the game.