Shout Out to Damon Saddler

Damon Saddler has been in industrial design for more than three decades, specializing in the creation of toys and games. Here's a sampling of what he's created over the years: 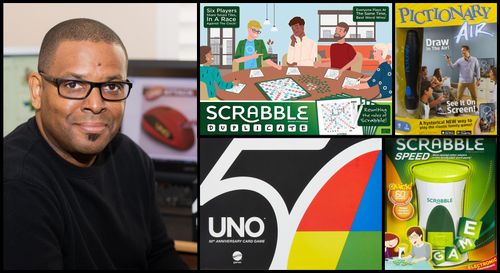 Let's start with the basics from Saddler's BGG game designer page:
Quote:
Damon Saddler is a Key Lead Designer for Mattel, where he's worked since 2009, and he is currently in the Games Division designing some of the most well-known games in the portfolio, including UNO Attack!, UNO Power Grab, Pictionary Showdown, and Scrabble Speed.

He's received over a dozen U.S. patents for his inventions and designs. Prior to working at Mattel, he was a product designer for Educational Insights for nineteen years, where he designed over 100 educational toys and games. He's a graduate of California State University Long Beach, where he received his Bachelor of Science Degree in Industrial Design.
On his personal website, Saddler adds this additional detail about his background and interests:
Quote:
My passion for drawing started at the age of seven while riding the school bus every morning. Sitting next to an eighth grader one day, I was mesmerized by the superhero drawings he was sketching out of a comic book. He was kind enough to allow me to sit next to him everyday and taught me how to draw the same characters. (Thanks Maurice Kane!) My passion for all things creative has fueled my appetite for areas such as drawing, painting, sculpting, photography, 3D Computer modeling, and product design. My influences have been artists such as Norman Rockwell, J.C. Leyendecker, Ernie Barnes, Diego Rivera, Charles White, Archibald Motley, Thomas Blackshear, and Kadir Nelson.
Saddler has posted some of his artwork on his personal site, and I'll share two works with you here: 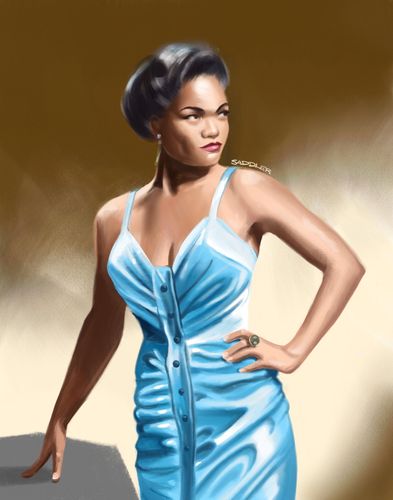 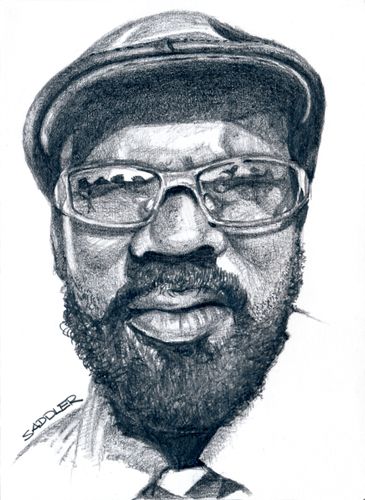 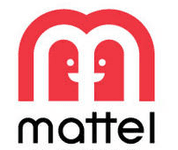 As news editor of BoardGameGeek, I mostly interact with hobby game companies, not publishers of mainstream games such as Hasbro, Spin Master, Buffalo Games, Winning Moves, and Mattel. In my mind, most of the customers of these publishers buy and play games, but they wouldn't spend time looking through a game database to decide what to play; they'd just go into a store and buy one of the games they see there, so does it make sense for me to write about these games in this space?

I realize this is a bit of a chicken-and-egg dilemma of my own making, and I do sometimes worry that this approach comes off as snobby. Why not write about the best-selling games on the market? The ones that hundreds of thousands of people enjoy? After all, if you play a game and get something out of it, who am I to say that you made the wrong choice?

In early February 2021, my wife said, "I feel like playing UNO. Do you have a copy?" I felt sure that I did, but I couldn't find one, so I bought the UNO Minimalista deck that Mattel released in mid-2020. (In early 2020, Brazilian graphic designer Warleson Oliveira knocked up his own version of UNO called "Versão Minimalista" and posted it online only to have tons of people say, "I wish my copy of UNO looked like that!", so Mattel decided to license the design and put it into print.)

UNO isn't a revolutionary game, but my wife, my son, and I have had a fine time playing it over meals and in the evening. I'd prefer to play other games, especially since I'm unlikely to post an overview video about UNO anytime soon, but they're enjoying playing something they know, and I'm happy to do something they like to do, so that game keeps hitting the table. In this case, as in many cases, the game is the social facilitator that's bringing us together to interact with one another, so kudos to the author and artist and publisher for a successful design — except for the white type on yellow, mind you, as my eyes have a hard time seeing those figures correctly. 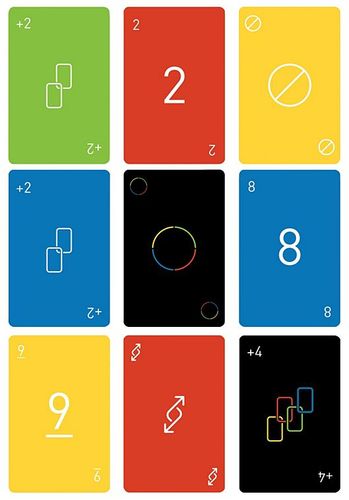 Patron Badge for 2004 through 2021
I bring up that story because, among other things in his time at Mattel, Saddler has designed UNO Attack! (2010), UNO Blast (2012), UNO Power Grab (2012), and UNO Braille (2019), and UNO Premium 50th Anniversary Edition (2021). He has taken an incredibly popular game — dubbed in 2018 by the NPD Group, "the number-one selling item in the entire games category year-to-date and...the only card game in top 10 best-selling items in United States", a game that has sold more than 150 million copies — and found new ways to deliver familiar fun to people who love that game.

Giving people more of what they love sounds like a great way to spend your time on Earth... 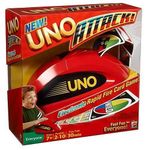 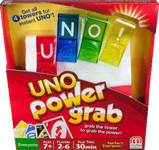 Patron Badge for 2004 through 2021
Another Mattel brand that Saddler has gotten to rework is Pictionary, with him being responsible for Pictionary Disney (2012), Pictionary Showdown (2013), and Pictionary Air (2020) — an ingenious co-design with Jeff Bazarko that I got to sample at Gen Con 2019.

Here's a sample video that I recorded of a young player at that show:


As with the UNO designs, here you're taking something that people already know, and remixing it for them to experience in a new way. I love looking at "elemental" games — games that are reduced to bare bones elements, which Pictionary is given that the game is essentially "draw something that others can guess" — and seeing how the concept at the game's core can be redone.

In some ways, I suppose I'm one of the prisoners in Plato's "Allegory of the Cave" who sees all the shadows on the cave wall — the varied reflections of "the one true Form" — and gets a kick out of the variety of shadows he sees. Sure, the Form is interesting in its own way, but the shadows can be compelling, too, and you can appreciate the artistry of whoever creates those shadows, just as you can appreciate the skill of someone drawing a "shadow" of a kayak in mid-air...

Patron Badge for 2004 through 2021
One problem that we have with the BGG database is that it doesn't automatically register every game brought into existence. (Note the missing link above on Pictionary Showdown.) On top of that, mainstream games often don't list a designer on the box or in the credits, so even when those games are on BGG, we don't know who created them. Such a pity.

When I first started looking at what Damon Saddler had created, his BGG designer page listed only three titles. I found a few other credits online, then asked him whether he had a list of his work to help update this BGG page — and he sent me a list with more than sixty titles on it! Many of those items are electronic games, learning aids, and other items that don't qualify as a game under BGG guidelines, such as GeoSafari Talking Globe, Wordiac, Neurosmith Music Blocks, and Magic 8 Ball: Hello Kitty, but even so I found a number of uncredited database items that now bear his name on them.

What's more, I have even more Saddler titles that still need BGG listings. One title that I have added, however, puts a flip-and-write spin on a familiar word game:
Quote:
Scrabble Duplicate plays similar to Scrabble in that you're trying to create words from letter tiles that will score you more points than anyone else — but players are using the same letters each round and not everyone will place their words on the game board!

In more detail, the game includes one hundred letter tiles, as in the original Scrabble game. On a turn, someone flips seven letter tiles face up, then each player writes a word using some combination of these letters on their personal dry erase board, trying to score as many points as possible. You write down the score for your personal word, then whoever has the highest score uses the face-up tiles to place their word on the shared central game board. Everyone else then writes this word on their dry erase board in place of whatever they had.

You then refill the tiles so you again have seven face up, then each create a new word on your board, building off the word already there. Collectively you'll build a shared interlocking grid of words, but you're scoring individually for your creations. Who will up with the most points?