They look good on the red and blue plastic pieces.

I don't think the light and heavy artillery look different enough. People won't register the difference in thickness unless they are right next to each other. Perhaps a larger wheel and a double barrel on the heavy.

Patron Badge for 2015 through 2016, 2018 through 2019
Added a little block to the breech(?) of the Heavy Artillery to differentiate it a bit from the Light Artillery. I also flipped all the Blue units so the blue and the red face each other. Minor detail, but I like it. 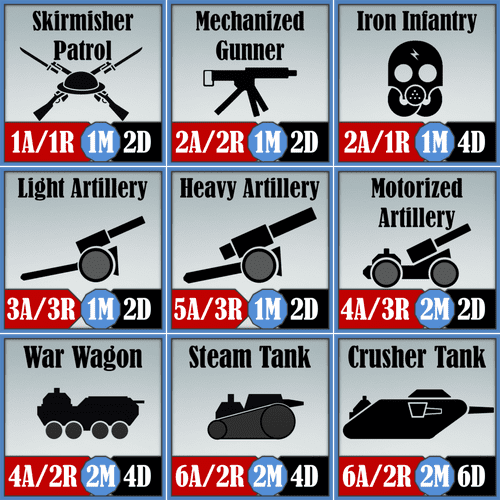 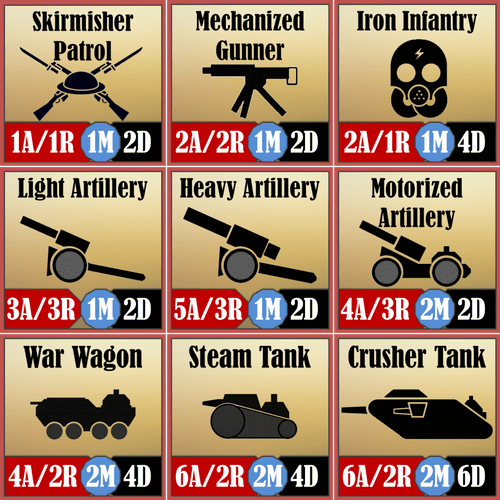 I might try taking some of the cover art background colors and making them the backgrounds for the two sides to "dirty" it up a little. We'll see.

Tonight or tomorrow, I plan to post a new WIP thread on the game with the cover art, and links to rules and PnP pieces.

Patron Badge for 2015 through 2016, 2018 through 2019
Narrow Gate Games wrote:
Tonight or tomorrow, I plan to post a new WIP thread on the game with the cover art, and links to rules and PnP pieces.

I did post a new [WIP] thread, but forgot to post the link here in case anyone is interested:
[WIP] "Iron & Brass" - [Contest Ready] Entry in 2015-2016 Wargame Print and Play Contest

Patron Badge for 2015 through 2016, 2018 through 2019
leifericson wrote:
Narrow Gate Games wrote:
Can't have this awesome game cover art of a tank crushing everything 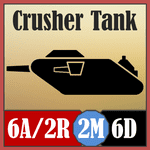 Seeing the two images next to each other, it is an interesting mix of style. The cover art has tattered edges and dull colors. The game pieces are very slick and modern. The game pieces are a huge draw to me with the great look of the stats line and minimalist art. Are people going to get the feel of the beautifully designed game pieces from this cover art?
I think you raise valid points.

At the risk of defacing the cover art contest winner, I went ahead and cleaned up many of the imperfections in the base image (the white splotch on the right side of the image, the edges, etc.), and added some "pop" to the color of the image.

I think I like this better. Or, did I go too far? 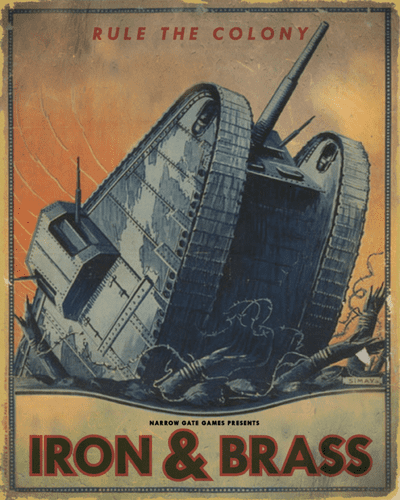 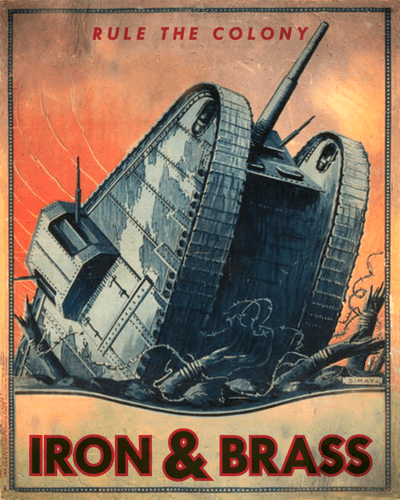 What do you think?

Patron Badge for 2015 through 2016, 2018 through 2019
dumarest123 wrote:
well all that clean up you did i could have done by deleting a layer in photoshop which added the worn edging to the image
Those photoshopped worn edges are very convincing. I assumed that was from the original image.

I'm just sitting in a hotel room on a business trip with too much time on my hands, and I starting thinking about Gene's post and his "interesting mix of style" comment - the tattered looking image contrasting with the slick looking game pieces. So, I tried making the image look more like an almost new WWI poster would look during WWI, rather than what it would look like in the early 21st century.

Patron Badge for 2010 through 2019
definitely good practise. it is as hard to age an image as it is to repair it

I really like the new brighter cover. But really it is a matter of theme/style. One could dirty up the playing pieces instead of brighten the cover. Or leave them both as is. Just an observation I noted.

So let play this puppy! I'll print mine out today.

Please note, after a little more playtesting, I noticed 2 things:
1) The tanks are very strong, so I upped their costs in the rules (from 4 and 6 Gold to 6 and 8).

2) The ranges as I had defined them were big, so I redefined the ranges to orthogonal squares (so a range of 3 = 3 squares straight, or 2 straight + 1 turn). Check out the rules for a diagram. A range of 3 used to cover 40 squares of the board, now it covers 24. This change just sort of makes the board a little bigger, if that makes sense.

I know the game is not perfect, so please let me know how to make it better.