"This is a really weird game, and you’ll find that most people will not want to play this."
But it isn't.
So there aren't.
It's funny how BGG works sometimes. 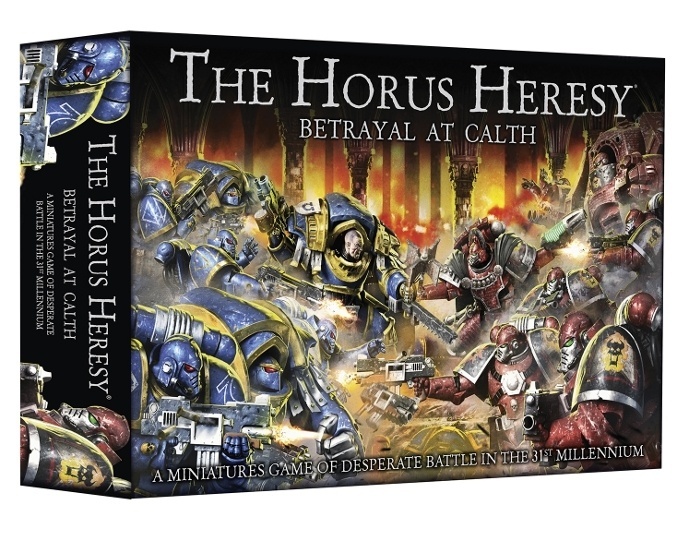 ICV2 wrote:
Set 10,000 years earlier than the canon 40K universe - in an era where civil war turned space marine against space marine - Betrayal at Calth chronicles the battles fought beneath the ruins of the world Calth as Kurtha Sedd and his Word Bearers marines stalk Captain Aethon and his Ultramarines in one of the earliest battles of the galaxy-spanning civil war known as the Horus Heresy.

The all-new Horus Heresy: Betrayal of Calth game is different from other games set in that world. The game is scenario based, with a “campaign” of six interconnected scenarios included in the box. Additional scenarios will be published by Games Workshop, with the first appearing in next week’s White Dwarf magazine. The scenarios are played out on a geomorphic map, composed of four double-sided board tiles, using a dozen custom dice and a deck of 42 game cards. Tokens and markers are also included. MSRP is $150.00.

The 38 highly-detailed Citadel miniatures included in the game will be of particular interest to Warhammer 40,000 collectors, as this is the first time that models from the Horus Heresy era have been made available in plastic. These models will be fully compatible with the Warhammer 40,000 tabletop miniatures game and the entire line of Forgeworld resin models from that era. Space Marine models are the best selling series in the Games Workshop line, and 40k frequently ranks at the top of the chart for non-collectible miniatures (see “Top 5 Non-Collectible Miniature Lines-Spring 2015”).

Altogether, 30 Legion Tactical marines in “Mark IV” armor, 5 Terminators, 1 Contemptor Dreadnought, 1 marine Captain, and 1 marine Chaplain are included in the set, all without sculpted Legion markings so they can be used with any Space Marine army.

That's because BGG as a whole hates GW, sadly.

Dakka Dakka has some really good info if you want more - www.dakkadakka.com

There's a reason for everything. In this case, the reason is GW.

Reggie P
(thaddeuspwhirl)
United States
Ohio
I for one am very excited by it. I don't have much interest in the 40k miniatures game, but I love Games Workshop boardgames and wish that they published more these days. I'll be eagerly anticipating reviews on the gameplay.

Here are a few factors that I think contribute to the lack of buzz on BGG:

1. The models will need to be assembled off of the sprues, and they will be far more complex to put together than the models in 3rd/4th Edition Space Hulk. Those were snap-fit, while these are more traditional Games Workshop models with many complex parts that all need to be glued together; there will even be more parts in the box than you can use for the miniatures to allow for customization if I understand correctly. It was already off-putting to some for the assembly required in Space Hulk, and this will be more so.

2. It may be hard to tell many of the Space Marines apart without painting or marking in some other way, because the two sides look much more similar than the Terminators vs. Genestealers of Space Hulk.

3. The price will be $150 if what is being reported is true. While not exactly outrageous, it crosses that psychological boundary of the century mark. A triple digit price will be a barrier to entry for many.

Some other things I've heard:

If this sells well, it could lead to a full 30k line to replace the Lord of the Rings miniatures game that Games Workshop puts out. This would be interesting, to see if they would continue to expand this board game or solely begin releasing stuff for the tabletop miniatures game. I would certainly hope to see more scenarios for this game in the future if the gameplay is as awesome as I think it has a chance to be!

Along those lines, it's possible that this will NOT be a limited release in the way that Space Hulk was. This would line up with it being a sort of starter set for an army for the tabletop game, since (at least as far as Games Workshop prices go) this seems to be a rather amazing deal for what is included in the box, perhaps one of the best ever. And that isn't even considering the components that are solely limited to the board game, such as the board tiles and the custom dice and cards.

Regardless, this is one I'll be watching closely in hopes that it turns out to be a really awesome game, and here's hoping if that's the case that it will continue to receive support!

Boofus wrote:
There's a reason for everything. In this case, the reason is GW.
This, all day long.

Vasilis
(Bowmangr)
Greece
Heraklion Crete
Are you seriously comparing Ffg to gw? The former respects customers, the latter just tries to rip off their money with dubious practices. It's not BGG, it's common sense.

It's not yet-another-FFG-Star-Wars-game. That's why.

N. P. P.
(Skippy668)
Germany
If this were a Fantasy Flight game, there would be a decent chance the game would be worth playing.
Since it is a GW game, it might be worth it if you like the models.

Also because FFG gives out lots and lots of info, previews, game rules etc before release so that potential customers can make up their mind before buying. Pretty good business practice if you ask me. GW does none of the above, instead they want you to preorder the game with next to no knowledge of rules, replayability etc (unless you buy their magazine, as was the case with Execution Force) because if you don't preorder RIGHT AWAY it might be gone forever by the time it launches.

I'd say that's why there's no buzz on BGG about this game. Next to no info. Nothing to discuss so far. Cool minis though.

Have I gone mad? I'm afraid so. You're entirely Bonkers. But I will tell you a secret, All the best people are.
The pre-order price is $315.00 on the GW website.

It's a good game though.

Because of the overwhelming hate that is BBG. I really like Assassinorum Execution Force and Age of Sigmar but it's no use posting here about either because of the endless stream of hate that is the result of anything positive posted.

Please judge each game by its own merits/weaknesses rather than by your irrational hatred of GW.

Zack Parsons
(Atendarius)
Canada
Ottawa
ON
throwingmuse wrote:
The pre-order price is $315.00 on the GW website.
You are likely looking at the Australian website. It's $150 on the US site, $180 in Canada.

This is gonna be controversial here, on a boardgame wesite. NOT on websites dedicated to 40K, the miniatures game. There, this is the most exciting GW release of the year.

Mauricio Vives
(MVives)
United States
Smyrna
Georgia
ZombieMark wrote:
There, this is the most exciting GW release of the year.
Quite true, 40K folks have been waiting a long time for more affordable 30K miniatures, in plastic instead of resin from Forge World. The minis here (with the game) cost about 1/3 of what similar minis would be from FW.

Also note that this is not a limited release. The first print run is quite large, and there will likely be more (based on how quickly this first run sells, of course).

Mark
(ZombieMark)
United States
San Diego
California
throwingmuse wrote:
The pre-order price is $315.00 on the GW website.
$150 on the GW USA website. And, there are bundle deals with multiple copies of the boxset on other GW webstites. Obviously , GW knows many folks just want the minis*.


*BTW, as a generous gesture of goodwill, for anyone burdened with an excess copy(ies) of the boardgame (without miniatures), I will take it/them off your hands for the price of packing and postage. Unless somebody at the game store gives me one (or two or three). Or I find a copy or two in the trash there. In which case you will need to make other arrangements.

Jon Darlington
(JDarlington)
Canada
Ottawa
fightcitymayor wrote:
But it isn't.
So there aren't.
It's funny how BGG works sometimes.

It's not that funny or strange.

If Volkswagen came out with a car tomorrow, consumer response would be understandably muted, and possibly hostile. Whereas if Honda did the same thing, the market would be all over it.

Same thing. You can only fuck your customers over so many times before you lose them for good.

Martin
(Balerion84)
Slovakia
So much pettiness.

I guess I'm also a GW customer, since I own 2 of their games and few of their paints. Our relationship is strictly formal though. No fucking was involved at any point. Although I hope I'll be able to get my hands on their... new game. If it'll be good of course.

Mark
(ZombieMark)
United States
San Diego
California
No more F-bombs, use your grown-up words. Or, go on forums where no one cares what you say, anyway.

Balerion84 wrote:
So much pettiness.

I guess I'm also a GW customer, since I own 2 of their games and few of their paints. Our relationship is strictly formal though. No fucking was involved at any point. Although I hope I'll be able to get my hands on their... new game. If it'll be good of course.

ZombieMark wrote:
You found a point in that post?

I think its fun the way he explains it...

Billy Babel
(BillyBabel)
United States
Guymon
Oklahoma
Gameworkshop simply doesn't seem to have kept their talent for mechanics design. The last game that was really somewhat innovative was space hulk in 1989, everything else has been pretty derivative, or done better by something else for a better price. They don't have any Korey's, or Vlaadas, they just have talented artists. People want fun games, not great minis, and that's why GW gets shit on.

Yeah Warmaster lacked innovation, so devoid of mechanics it never led to anything.

Can't say Epic was decent either deffo a redundant assumption that people would play battles that small.

And who still plays Necromunda or Mordheim? Anyone?

Don't think they ever bothered developing Bloodbowl post 89, and if they had...nobody would have bothered copying that idea.

Battlefleet Gothic was a non start too, let's face it nobody wants to play epic spaceship battles.

25 years of sheer ineptitude, how are they still going? Or are they a secret gaming pyramid scheme.