There must be 5 Heroes minimum, so you can have a whole Hero deck from the Fray 'Verse. Will have to combine them from Fray, Tales of the Slayers, and the Buffy Season 8 cross over. Will need the same for the Villains and Schemes as well.

70 cards - 5 Heroes
- Melaka Fray
- Erin Fray
- Urkonn
- Buffy
- Gunther? He doesn't get out and about much, but might have to make do. Will reread Tales and Buffy Season 8 to see what else jumps out at me.
EDIT: Hells Yeah, Gunther flies around in a ship full of water shooting at Lurks! Solid choice for a Hero!

There are no Sidekicks in Buffy, so the remaining cards could be Bystanders. 3 of each

Still to be finalised

Still to be finalised

Let me know if any links don't work.

Now that art is available, I can start to make the templates required to make your own cards. Will make them available in Photoshop format when I'm finished. Card BG has been expanded for a 36 pixel bleed area, and the dotted line is the Text Safe area.

Have been thinking about the Fray expansion since I heard that Buffy was being released. 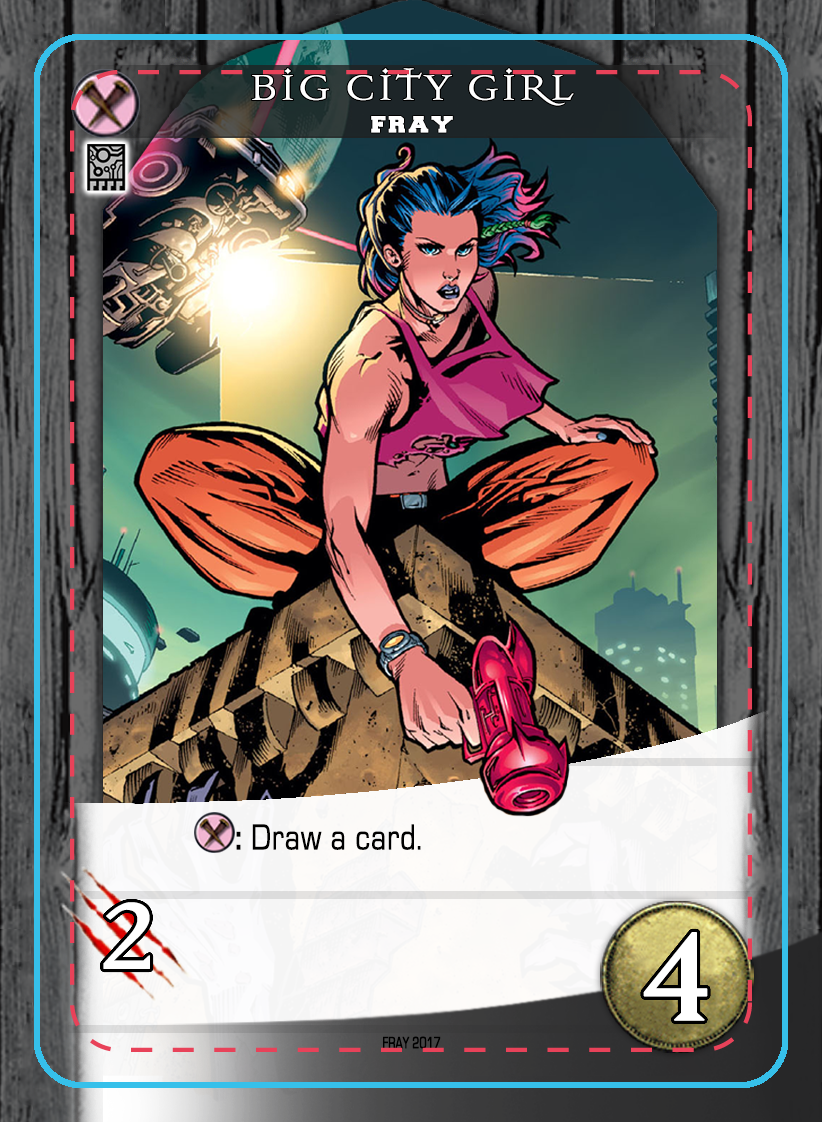 Hints are that the game board will have different names for the City squares, (The Bronze, Graveyard, etc). Maybe the HQ will be the School Library. :-) Anyway, Fray would be better played on a Legendary Mat, as obviously she is not in Sunnydale.

Card specifics will wait till the game is released and we see the new rules. Not sure I can scrounge up 5 new Heroes from Fray. I guess we'll see. 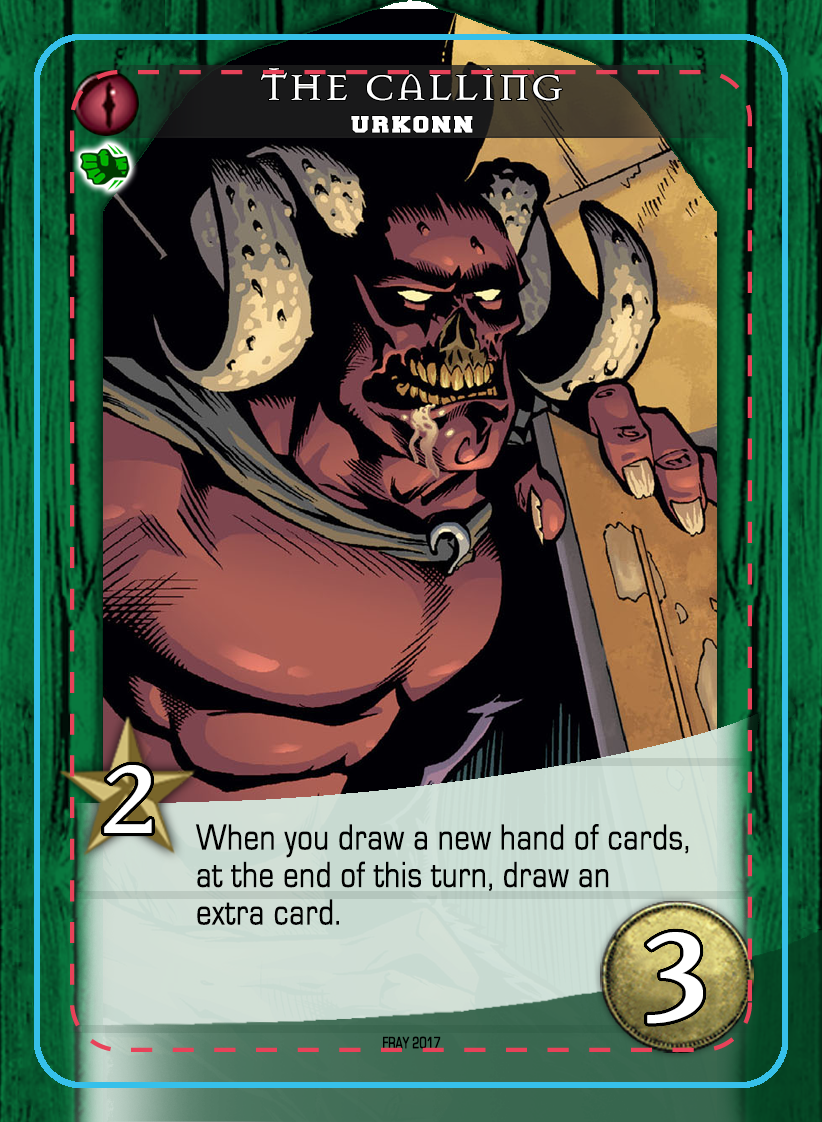 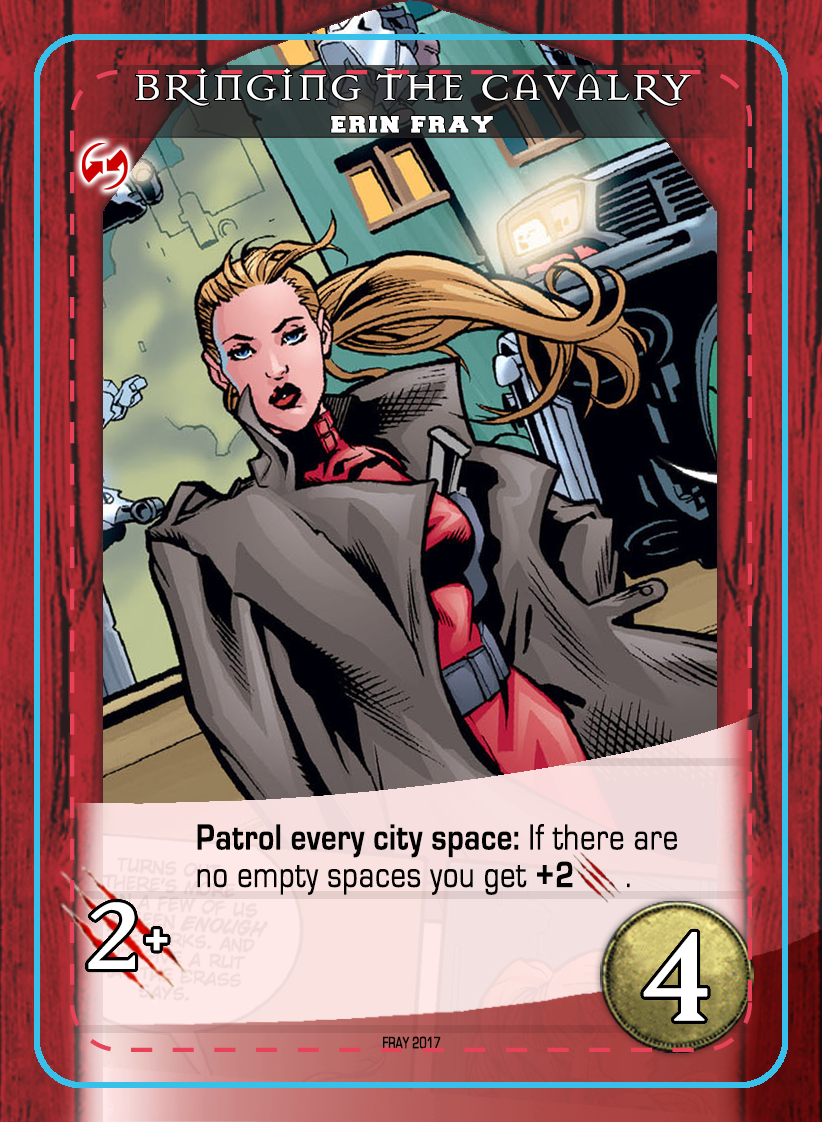 No group to put Erin in, yet. 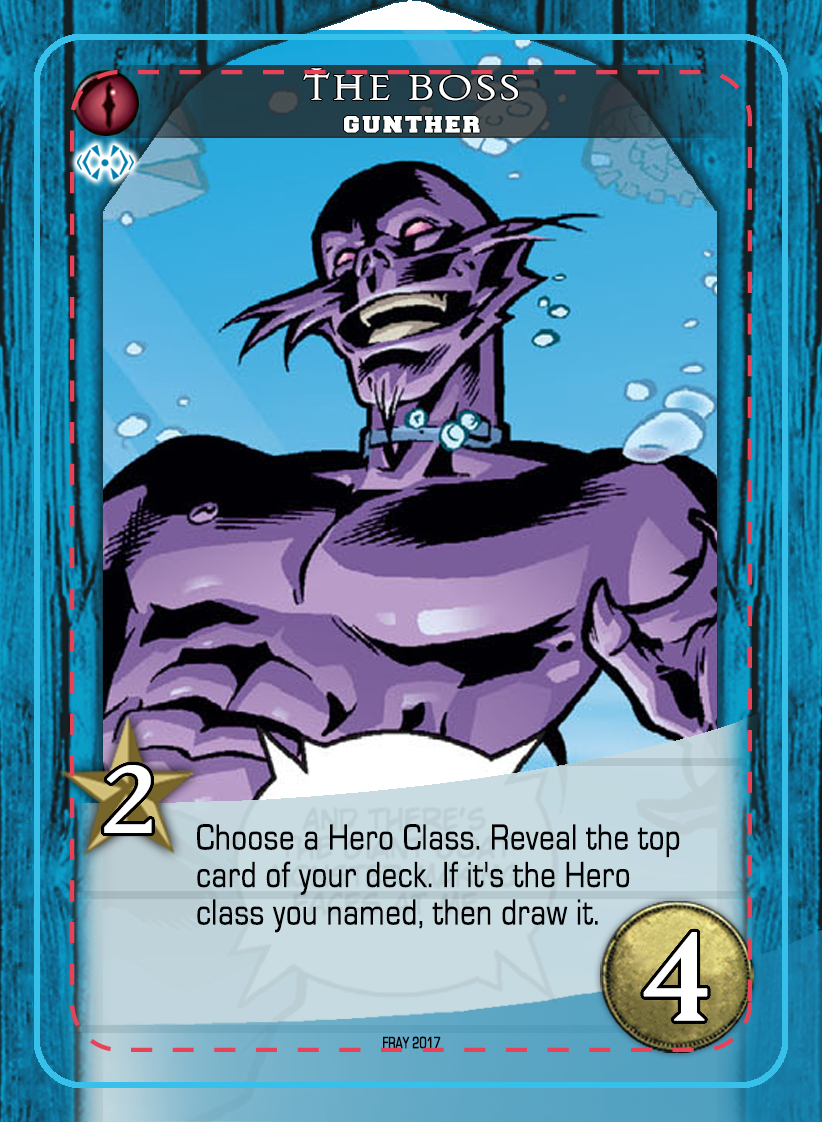 Jamie
(Wyndam22)
United States
This is great. I would definitely be interested in the templates! It sounds like an official Angel expansion might be a pipe dream, so it might be up to the BGG community to get those characters into play.

Shane Fletcher
(Fletch_smf)
First 4 Common cards done and edited into the OP. No official Instinct card yet, so I'll leave that until another Blog post reveals one. Just need to work on Uncommons and Rares. 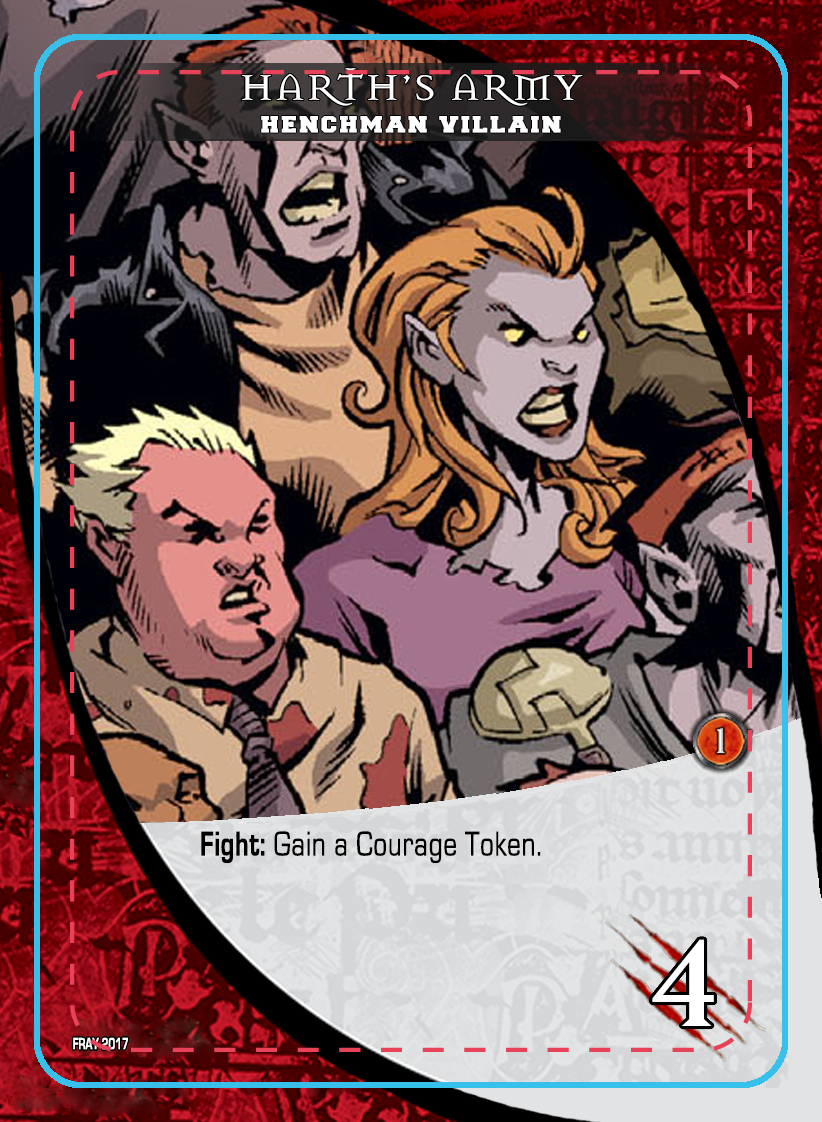 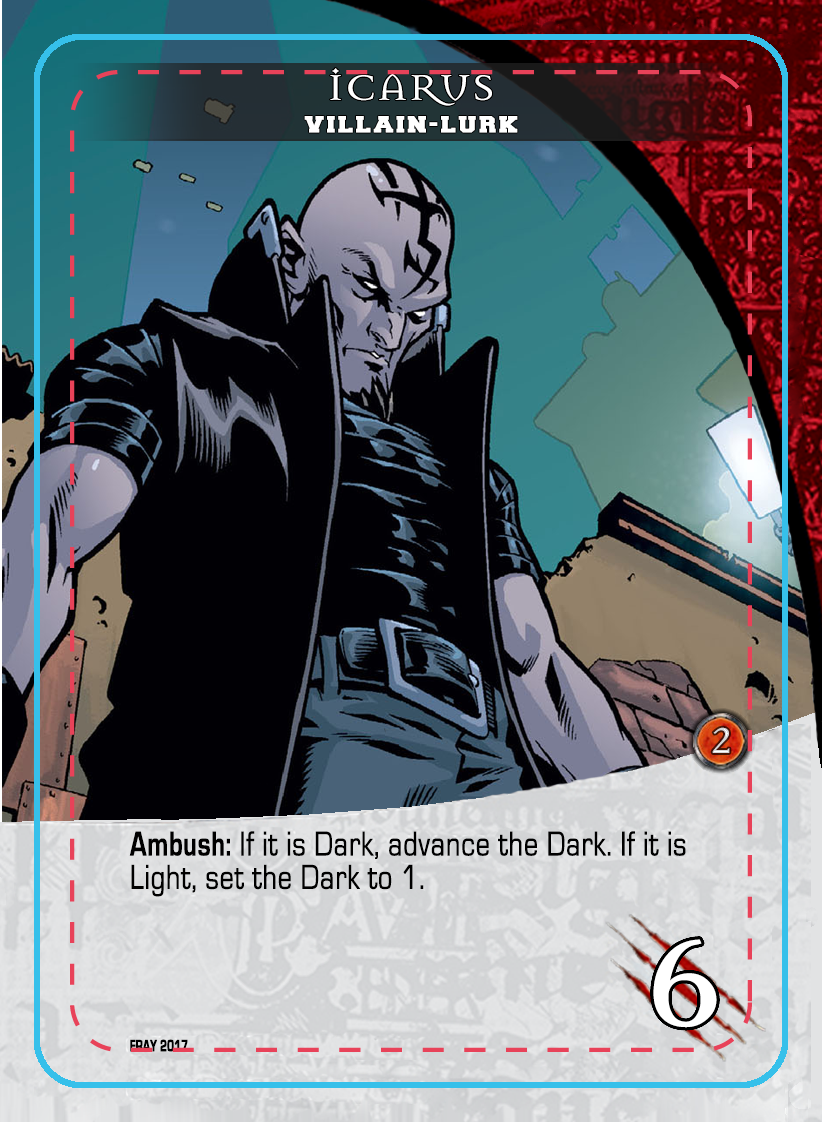 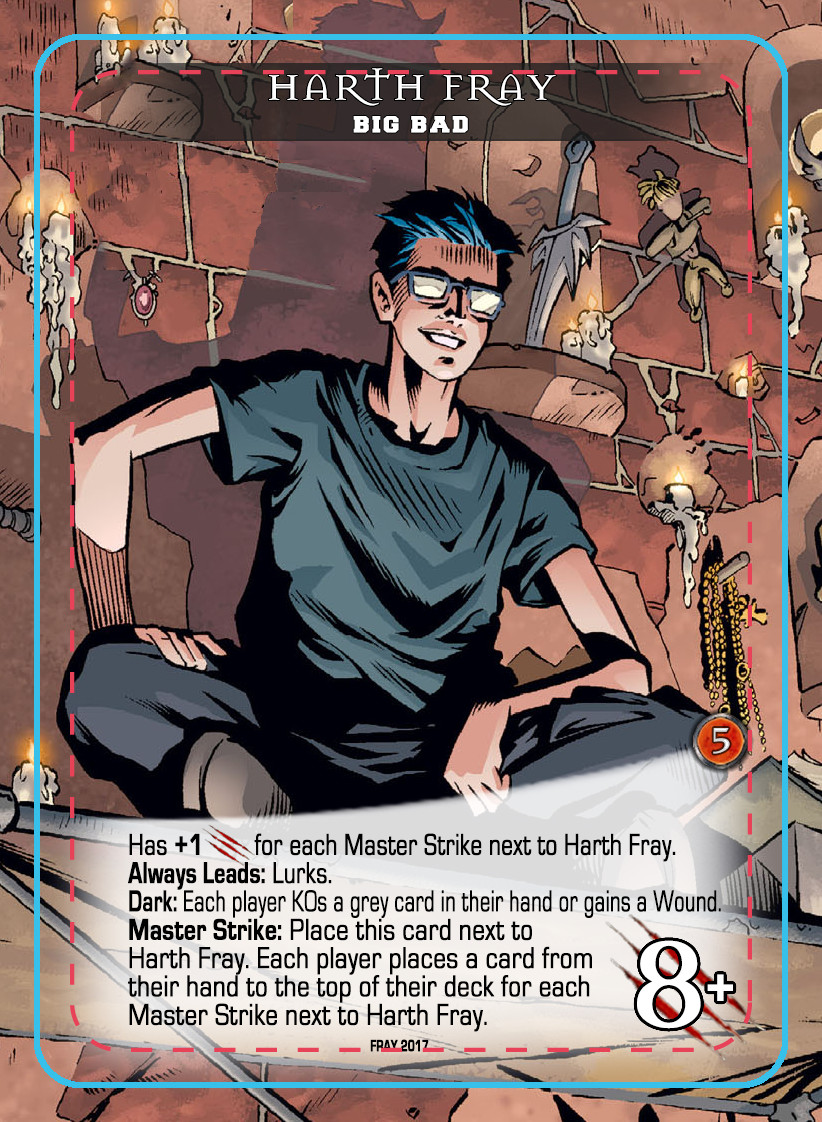 "A person is smart. People are dumb, panicky dangerous animals." Agent K. Oh my what he would think of people had he known about what the internet would become.....
I would love to see the templates released. I would love to make a cordelia card set....

Shane Fletcher
(Fletch_smf)
Okay, so have finished the Hero Template, and tidied it up for ease of use. Still trying to find a pic of Mastermind Tactics to make sure they work, and a Scheme that has a large amount of text (as opposed to the Hellmouth one, which has the small amount of text.

The photoshop template is set up to open with an example Hero in place, so you can see how all the layers work. The generic values for Cost, Recruit and Attack are grouped together, and I recommend duplicating the layers you need into the Titles section for each of the 4 card types you use (Common 1 & 2, Uncommon and Rare) for each Hero. There is a bit of separation, by necessity, of each of the layers you use to make a card. BG images must be on the bottom. The coloured templates must be in the middle and the text must be on top. I recommend naming the BG images for the Card Type + the Attribute to help tie everything together (Common 1 Covert, for example). It will help make sure you have all the right layers on as you adjust your cards.

Oh, and you should use a new copy of the file for each different Hero.

Let me know if any links don't work.

Jamie
(Wyndam22)
United States
Thank you so much for posting everything! Now to start on a custom Wesley...

Shane Fletcher
(Fletch_smf)
Wyndam22 wrote:
Thank you so much for posting everything! Now to start on a custom Wesley...
Please share them in this forum. :-) EDIT: Okay, I think I've got pretty good motivation for her cards, and I think they are balanced pretty well against the cost. Have quoted the stats for each card so they stand out, and will give it a day or two to reflect on them. And then, I'll mock them up.

Starting with her character, as I think she will be easiest to break down. Art we have:

Put the image to the card. Now I just need to work out the motivation for each card.

There should be no modifiers for Dark/Light. She is not about that.
Strength cards should get modifiers for Tech/Knowledge. Using Knowledge (research and planning) should help in her fighting.

Quote:
Common 1 - "There's a file on him"
Tech/Knowledge
Cost: 3
2 Recruit
If this is the first card you have played this turn, reveal the top card of the Villain deck. If it is a Villain, you may fight it this turn. Otherwise, put it back on the top or bottom of the Villain deck.
--------
Investigating bad guys for an advantage ... either looking at top Villain deck, or lowering attack of villains in "Sunnydale"?

Quote:
Uncommon - "The Cavalry"
Tech/Knowledge
Cost: 5
3 Recruit
Draw a card for each other Erin Fray card you have played this turn.
----------
Seems like "The Cavalry" should get a boost from other Erin Cards. Can't find a "Law" logo, at the moment, but I'll keep looking for that.
EDIT: Or ... it should be about drawing cards. Or recruiting to your hand. That seems thematic as well.

Quote:
Rare - "Serious Traffic Violation"
Strength
Cost: 7
3+ attack
Strength: You get +3 attack usable only against Villains in the Hellmouth & Downtown
-------------------
Seems like a good one for the Rare, as it's not the sort of thing you do regularly. Small attack with + attack for Streets, Rooftops and Bridge? 7 cost Rare. Maybe even 6? 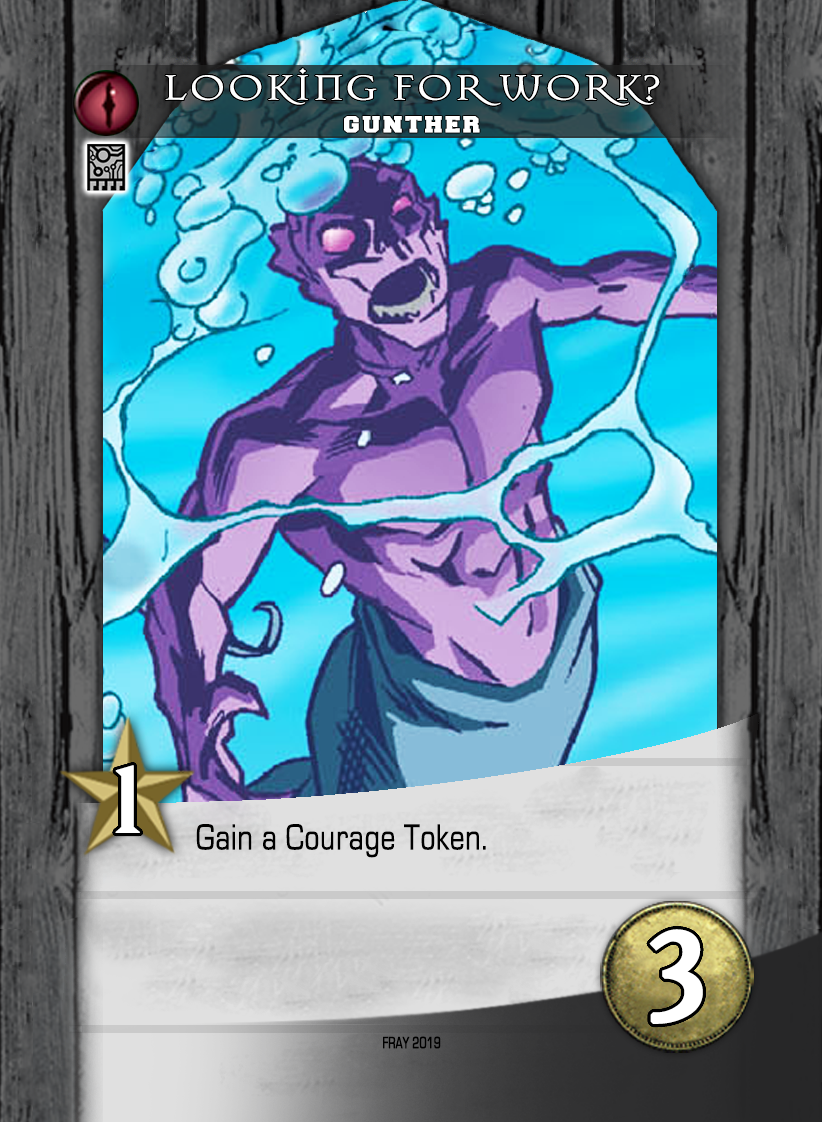 So, he's going to be an interesting hero. He's somewhat physicaly separated from people, living under water, so not so much with the fighting. Except his Rare which will be in his ship.

Is he more about the recruit? I don't know about that either. Maybe he should be more about drawing cards, or working with your deck. Manipulation seems like his thing. Getting others to do what needs to be done. And with organised crime connections, maybe he can do things with the Villain deck. I am constrained by the images I can use, so have added them below. This will help with the inspiration for the cards.

Another character with no group. Although he seems really unaffiliated. Reading the description of the Scoobies, mortals who fight the good fight, I think Erin should probably be in with them.

Covert and Knowledge will be his characteristics. I don't think this set is going to have a Magic card in it.

Okay, Rare is about Attack. To make the other 3 cards work together, which is about Recruiting, manipulating people, using Courage tokens as currency, and spending them to get things done.

Common 1 - "Face on image under water"
Quote:
Common 1 - Looking for work?"
Knowledge
Cost: 3
1 Recruit
Gain a courage token.
Common 2 - "Split Screen with Mel holding a trinket whilst standing on the glass, and Gunther looking up at it"
He's paying for the trinket, but also setting up Mel, to put her in debt to him. Oohhhh We have courage tokens which might be a stand in for currency.
Quote:
Common 2 - Late with my grab"
Covert
Cost: 2
1 Attack
You may spend a Courage Token to draw 2 cards.
Uncommon - "Face on image under water, with Mel and Urkonn"
Quote:
Uncommon - The Boss"
Knowledge
Cost: 5
3 Recruit
Covert: If you have spent a courage this turn, gain 2 courage
Rare "Firing Ship"
Quote:
Rare - Don't think to Outbeast me"
Strength
Cost: 7
4+ Attack
Each courage you spend on attack, gains an extra +1 attack

Hope you can post a link on Wich I can download all The cards, most links don’t work with me. Great work.
I hope there Will be an original expansion for The other big bads, like Adam, The three, cards like The Key etc etc.

Am working on this when I have time, and will update as I finish drafts of cards. So stay tuned. 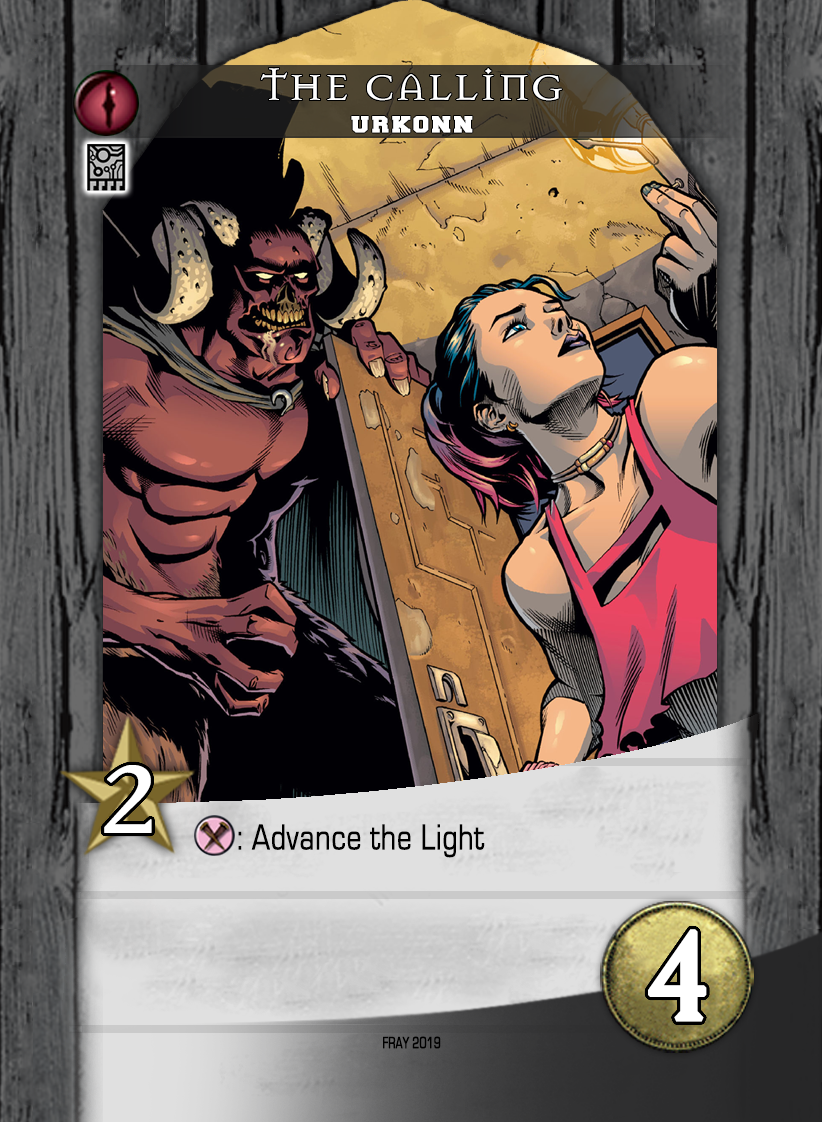 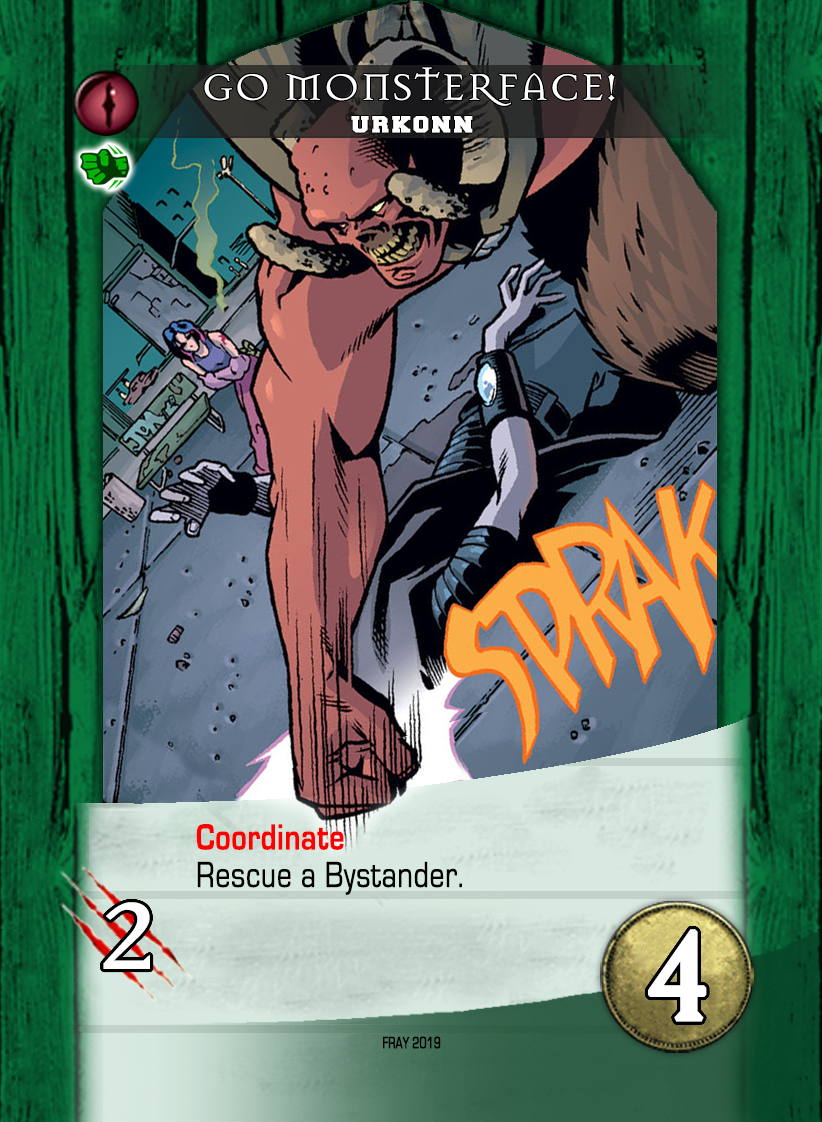 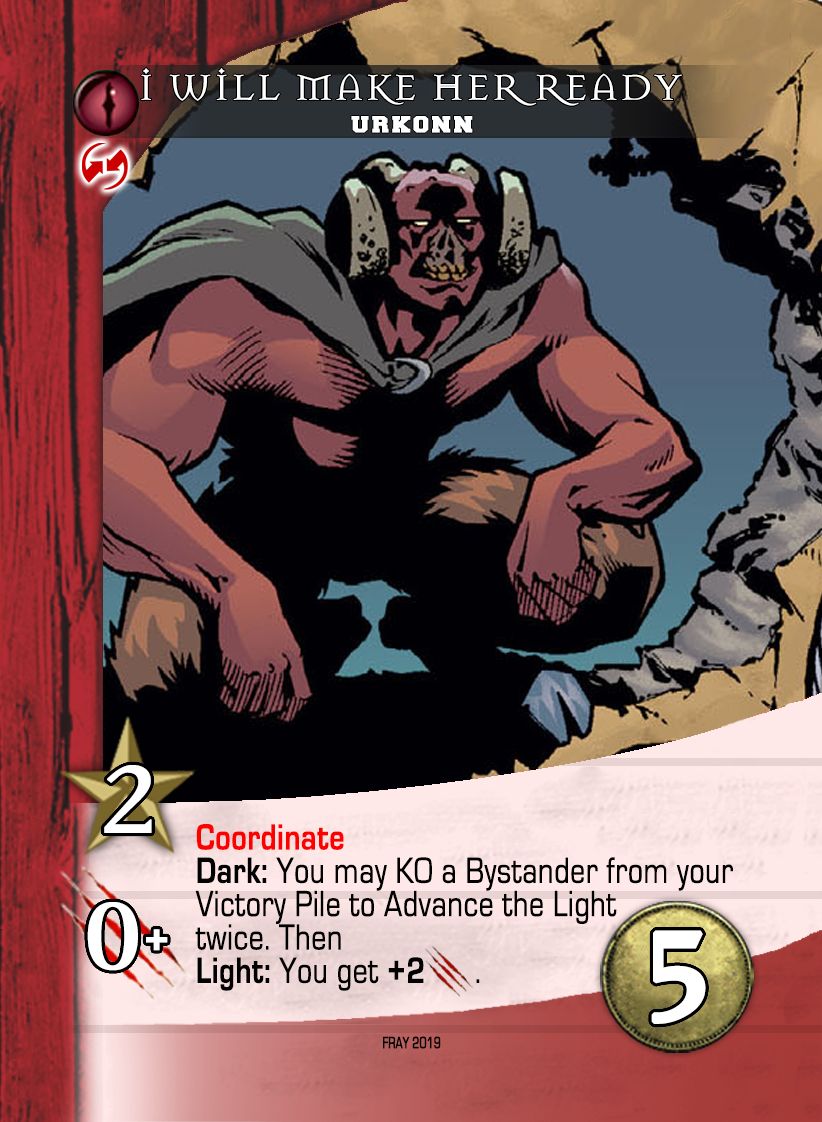 So, trying to think of what his abilities should be, as the one who is preparing Mel for the upcoming battle. He'll be Supernatural class, because he is very adamant about not being a Watcher. And he is a mix of training, and history teacher. So, knowledge and strength seem like the way to go.

Coordinate seems like a good thing for this Hero. He often steps in to help Mel out.

It seems like a fighting image for one of the commons and the Rare, and a talking image for the other common and the uncommon.

Also, a Hero that messes with the Light and the Dark seems important in this set, and being Supernatural, he seems like the best bet.

Okay, Urkonn is all about getting Mel ready for the coming fight, both physically and mentally/psychology.

First common is definitely The Calling. Would be fun to have a Slayer trigger, maybe to Advance the Light. Could be a cute pun with the image of Mel turning on the lamp. Recruit card, obviously. Knowledge.

The art for the Second common is him coming to Rescue Mel, and pound on Icarus. Strength, attack and Coordinate. I think a small base attack, then Dark and Light keywords that could work together. No Sewers in the Buffy game, or I'd give a bonus to villains there, or a Patrol keyword. Funny, Patroling is what they called it in the TV show. We should definitely use it. Oh, and he's an imposing figure, so the cost should reflect that. Nothing lower than a 4 cost card.

Uncommon art is not attacking. It is about unknown maneuvers he makes to push Mel in the right direction.

Quote:
Common 1 - "The Calling"
Knowledge
Cost 4
2 Recruit
Slayer: Advance the Light
Quote:
Common 2 - "Go Monsterface!"
Strength
Cost 4
Coordinate
2 Attack
Rescue a Bystander
Quote:
Uncommon - "I will make her ready"
Knowledge
Cost 5
2 Recruit
0+ Attack
Coordinate
Dark: You may KO a Bystander from your Victory Pile to Advance the Light
Then Light: You get +2 attack
Quote:
Rare - "We would have lost"
Strength
Cost 7
3+ Attack
Slayer: If you advanced the Light this turn, you get +3 attack. 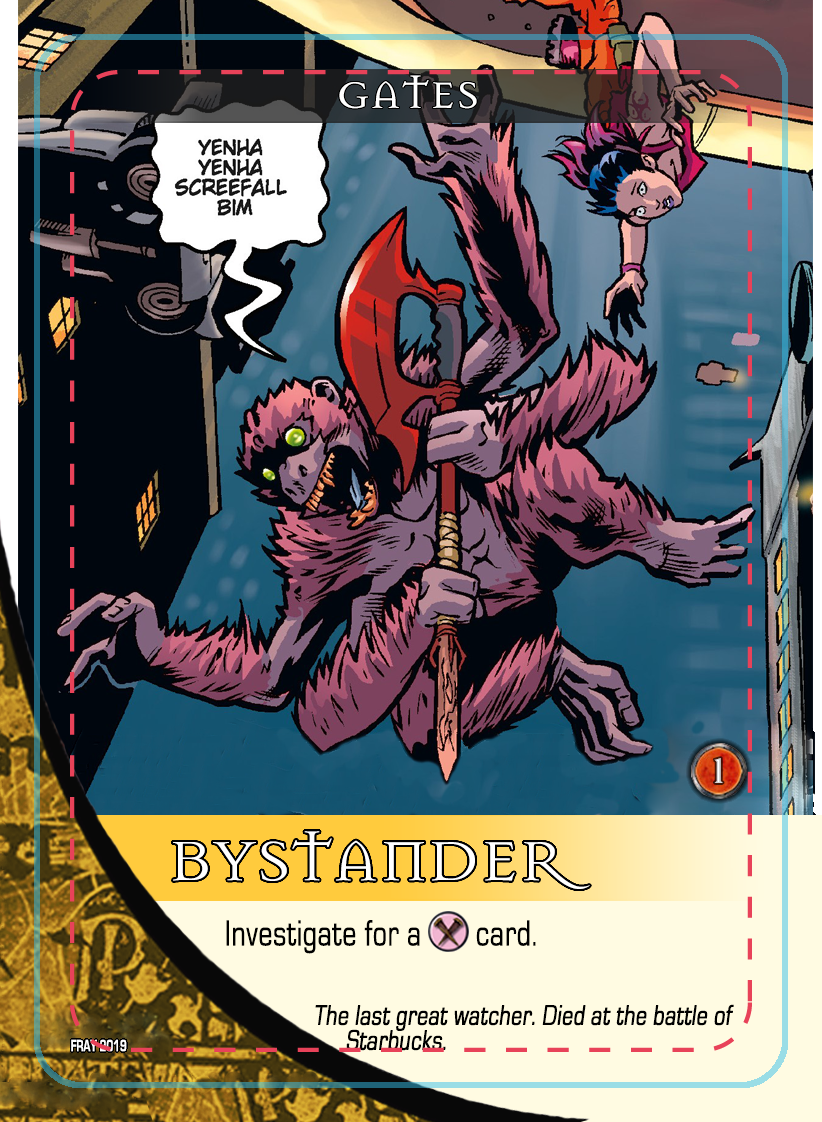 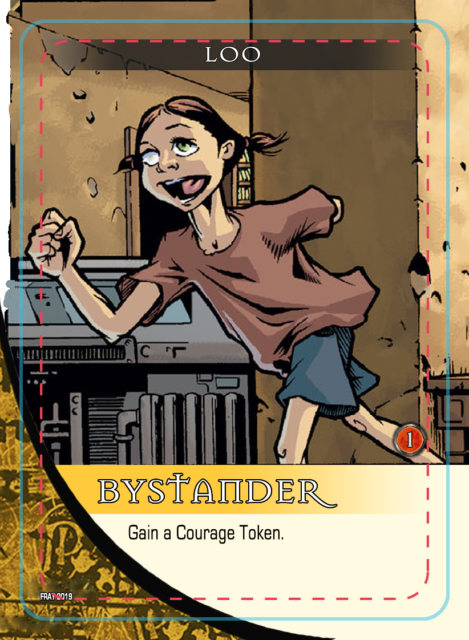