Excited yet? This game is loosely based on Neil Gaiman’s Hugo Award winning short story A Study in Emerald. In this story, we are cast back into 19th Century, but instead of Queen Victoria sitting upon the throne of England, we have a typically Lovecraftian Old-One: Gloriana. In this secret-semi-co-op game, players will either attempt to assassinate the Old Ones (Restorationists) which are now ruling the world or (as Loyalists) thwart those attempts by first identifying and assassinating those who seek to bring about that change.

A Study in Emerald has a medley of game mechanics and an assortment of custom meeples and cards which are used to guide you through this game of deduction and assassination.

Deck Building - Eight Cities from continental Europe and the UK are represented on the game board, and each has its own City Card and ensconced reigning alien monstrosity. Action cards are then added to each location and shuffled to create a unique city deck. The topmost card is revealed and this is the card players can purchase – or if it is a Royal; can then be assassinated. Players begin with a starting deck of ten cards, which they can then use in a variety of ways, but mainly to buy new cards and build their decks. 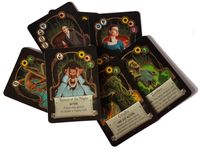 Area Control – Players will use their cards to increase their influence in a city – needed to buy cards, or to stop opponents buying cards, but they will also move their Agents, to be able to make assassinations.
Hidden Roles – All of the above is done whilst playing as either a Loyalist or a Restorationist, so you’ll be trying to buy cards that will help you, but not give away which side you’re on, while also trying to work out who is also on the same side as you, because…

Semi-Co-Op – This is sort of a semi-co-op game, only one player will be the true winner, but; the player with the lowest score will actually drag everyone on their side down five victory points during final scoring. Also, as a Restorationist, you never want your identity revealed, done by either losing all your Sanity tokens – via the Sanity die - or losing all your Agents from the board because that immediately ends the game.

When thinking about this game, and how to review it I’m struck by two phrases which I think sum it up:
Chekhov’s Gun and Rachel’s Trifle.

Anton Chekhov; a playwright and short story writer who is widely known for his instruction to only include “elements” in a story if they are relevant and necessary. Rachel, a character in the nineties TV show FRIENDS once accidentally cooked a Trifle and Cottage pie as one thing.
How do these apply to this game? Well; it could be very easily argued that neither Neil Gaiman nor his short story has anything to do with this game (or at least very, very little), despite the title and the name emblazoned across the box. This “disassociation” also extends to the Sherlock Holmes link – yes there are some cards with character names from the cannon but it is literally the name and the likeness which is used. 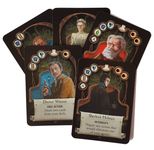 If Holmes and Watson were replaced by Bert and Ernie it would have zero impact on the actual game. Zombies and Vampires; these creatures don’t really feature in Sherlock Holmes stories to the best of my knowledge, and although zombies appear in Lovecraft’s work; it isn’t alongside Cthulhu, and yet the game comes with some cool zombie meeples, which only get used if one of sixty-six cards (1.5% chance) is drawn and seeded into one of the city decks.

There are a lot of things going on in this game, a lot, which does lend to the chaotic and confusing theme but not necessarily always in a good way. Each of the individual mechanics works, and work well, but the mixing pot of them all, explained in an obtuse rule book means it is a very bumpy ride playing this game. In fact, you’ll need several playthroughs to really get to grips with how to play it, and those playthroughs may be pretty frustrating.

The artwork is something that can’t be ignored in this game, and much like the game play I feel is much divided. The box, as you would expect has an Old One stomping through/over Victorian London, the board is brilliant, with really detailed hieroglyphics about the Old-Ones coming to earth seven hundred years before the game is set and even the iconography of the nine possible actions make all of the cards really clear.

But the card art, the thing you spend the most time looking at is…well, it’s not a style I like very much (reminds me a lot of Tim Sale’s work on the Batman’s the Long Halloween amongst many others), and I don’t think really fits the theme very well, but more so than that, I think it is quite poor. I’m not knocking the artist; Ian O’Toole, (I think Vinhos and the Gallerist are particularly lovely looking games), but the card artwork in A Study in Emerald looks like they are all half-finished colour roughs.

Ultimately; this game has some good mechanics, the hidden-role-co-op is particularly interesting. The theme and IP are interesting if not fully or as thickly applied as the box cover may lead you to believe. The short runtime (for a game like this) is very short, and the player interaction is really very good. But, you will have to work at this game, you will have to slug through the rulebook and look to FAQs and so on to really understand it, so getting it to the table might not be that easy, or frequent, but when you do, you may well find the experience if not enjoyable, at least interesting. 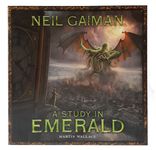 The Good:
This is a hidden-role game with a playing time of less than one hour, which is great if you like hidden role games and can’t afford to spend an entire afternoon/evening gaming.
Lots of interesting mechanics.
A thought provoking and interesting game

The Bad:
This game has virtually nothing to do with the short story and possibly trades off Neil Gaiman’s name being at the top of the box in pretty large font size – it also has nothing to do with Sherlock Holmes except for some of the characters on the cards.
The rulebook is not very clear, and despite all the examples (which kind of get in the way), there was still a fair amount of uncertainty when starting to play.
The artwork, it looks like there are three different styles going on between box, board and components here which are jarring, and the card art feels rushed and unfinished.
The end game victory point scoring is a little complicated and the negative impact team scoring doesn’t seem to make thematic sense.


Excited yet? This game is loosely based on Neil Gaiman’s Hugo Award winning short story A Study in Emerald. In this story, we are cast back into 19th Century, but instead of Queen Victoria sitting upon the throne of England, we have a typically Lovecraftian Old-One: Gloriana. In this secret-semi-co-op game, players will either attempt to assassinate the Old Ones (Restorationists) which are now ruling the world or (as Loyalists) thwart those attempts by first identifying and assassinating those who seek to bring about that change.

Here's the entire short story. It's a very intriguing story with a twist ending, and only 8 pages.

Cpt_Rawz wrote:
The Bad:
This game has virtually nothing to do with the short story and possibly trades off Neil Gaiman’s name being at the top of the box in pretty large font size – it also has nothing to do with Sherlock Holmes except for some of the characters on the cards.
I strongly disagree here. Wallace captures the story's universe extremely well, especially considering that there is only a hint of it in the actual story, from which Wallace must construct more for the game. The game is both true to the Gaiman story and the Cthulhu mythos.

Cpt_Rawz wrote:
The artwork, it looks like there are three different styles going on between box, board and components here which are jarring, and the card art feels rushed and unfinished.
Artwork is always in the eye of the beholder. I'm perfectly satisfied with it.

Cpt_Rawz wrote:
The end game victory point scoring is a little complicated and the negative impact team scoring doesn’t seem to make thematic sense.
I respectfully disagree. The scoring mechanic is necessary because no one can be certain as to who is and isn't on one's team. I'll explain further in the following spoiler since some may not have read the Gaiman story . . .

Spoiler (click to reveal)
Gaiman defines an alternate universe in which the Old Ones have been ruling the Earth for hundreds of years, and -- for the most part - benevolently. But there are those who are conspiring to overthrow the Old Ones (the royalty) and restore human rule; they're the Restorationists in the game. The Loyalists are out to preserve the royal rule of the Old Ones, and are thus out to eliminate the Restorationists. Consequently, it is counterproductive to eliminate one's allies. The effect in the game is that while assassination can be performed fairly regularly, one can't afford to assassinate everything in sight for fear of harming teammates. For example, a Loyalist can gain points for a successful assassination of another player's agent, but it that player turns out to also a Loyalist, the points must be subtracted at the end of the game.

As in the Gaiman story, Holmes and Watson are Restorationists, assassinating the royalty; Moriarty and Moran are Loyalists, trying ti caopture the Restorationists. And that's how there

There's a huge sense of uncertainty throughout the game, which I find very Lovecraftian.

As you say, a review is completely subjective - as much I try and provide both sides and your points here are both justified and eloquently put.

Fundamentally, I think "failings" of the game lie perhaps more with my expectations of what I thought it should or could have been of a much-loved story.

Again, thank you for joining the discussion

Jeff Weber
(Jeff Weber)
United States
Smithfield
KY
Great review. Thank you for your detailed points. I am a big fan of NG's fiction, so I was particularly curious about the use of the theme. The game doesn't sound like my thing though. Will be passing on this one.