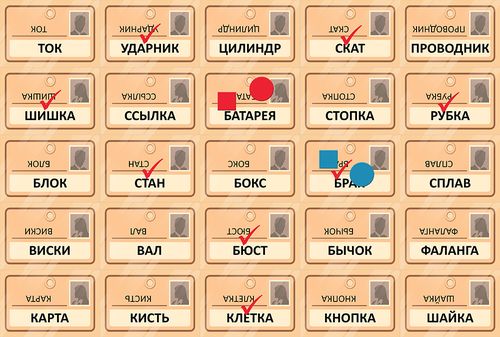 Julien K
(jujulautre)
Japan
Kyoto
Patron Badge for 2017
I guess you will provide us with an english version ? Shadows Amsterdam looks neat and I love codenames, so I'm looking forward to reading it.


Here it is run through google translate:

Quote:
The game involves 2 teams who choose their captain. Captains sit next to each other, and their teams - at the opposite side of the table.
Captains get 9 markers and 1 chip of their color (red or blue).
Captains mix cards with words and put the received deck into the center of the field. Of the top 25 cards of the deck, laid out on the table face up, a game field is formed in the form of a square with a size of 5x5 cells. Captains put a chip of their color on the central cell of the field.
Five penalty markers are placed next to the playing field.
Captains open the top 15 cards of the deck and put them on the edge of the table, face up. These are cards of hints.
Captains take on 1 random code table of their color and put them side by side, in one stand, so that their teams do not see the contents of these tables.
Quote:
Purpose of the game: teams must guess 9 words of the playing field, which are marked with the corresponding color on their captain's code table.
Identify the first command. Teams make a move in turn, starting with the first team.
In his turn, the team captain chooses 1 or 2 cards of hints and puts them in front of his team. If the card of the word the captain is hinting is on one of the 4 neighboring cards, next to the card on which the chip now stands (horizontally or vertically, including taking into account that the playing field is considered infinite and its continuation is on the opposite edge), then the captain gives 1 card of a hint. If the desired card is 2 steps from the current location of their chips, the captain as a hint gives 2 words.
Quote:
Players of his team must decide on which word in the playing field indicate these hints, and move the chip of his color onto it. The captain checks on his code table the color of the cage to which the players have moved the chip. If this cell is their color, then it puts a marker of its color on it. If this cell is black or the colors of the opposing team, then its team receives 1 penalty marker. After receiving the 3rd penalty marker, the team immediately loses the game. If it's a beige cage, nothing happens.
The captain complements the cards of hints, cards from the deck, up to 15 cards, and on this his turn ends.
The team that first laid all 9 of its markers on the playing field wins.

Alternatively, you can play in real time, when the teams make their moves simultaneously, and not alternately.

Kirk Monsen
(MunchWolf)
United States
Seattle
Washington
I played Shadows of Amsterdam at Gencon, so the only change I would make is that you could safely land on black. After correctly guessing all 9 words, the player then needs to be directed to and land on the black (exit) space to win the game.

Patron Badge for 2016
MunchWolf wrote:
After correctly guessing all 9 words, the player then needs to be directed to and land on the black (exit) space to win the game.
My variant is longer (9 words instead of 3), so I skiped it.

Thanks for translation! Pictures: 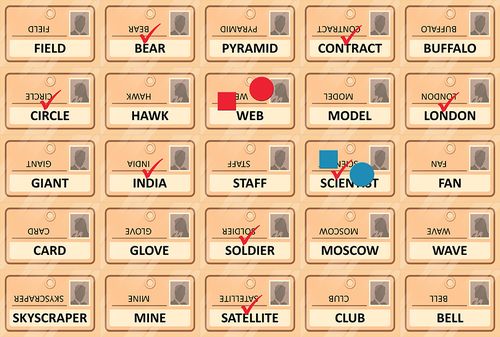 Xristos Lagogiannis
(fifini)
Greece
some further info please
a) why satellite card has a tick on the picture as it is 3 cards further
b) hint cards are replaced immediately after each player's turn?

Patron Badge for 2016
fifini wrote:
some further info please
a) why satellite card has a tick on the picture as it is 3 cards further
b) hint cards are replaced immediately after each player's turn?

a) playing field is considered infinite and its continuation is on the opposite edge
b) yes.