Even before the great conflict arose in the woods, bears despised the destruction of trees to build villages. Now when industrialization and war threaten the already delicate forests, they emerge to reclaim what was lost.

Bears are slow and must plan out their actions in advanced, leaving Order Tokens in each clearing, signaling their impending plans. However with the help of the locals, bears can change their plans at the last second, surprising their enemies. Building camps enables the bears to plan more actions and maintain a larger army, however they must defend those camps or risk losing big.

The bears are trying to reclaim the forest and their primary way of scoring VP is ruling clearings after their enemies have had a chance to fight back. To help with this, bear warriors are massive, and any clearing that has even a single one will have a rule advantage. Moving through the woods also ensures that they can attack foes independent of rule. 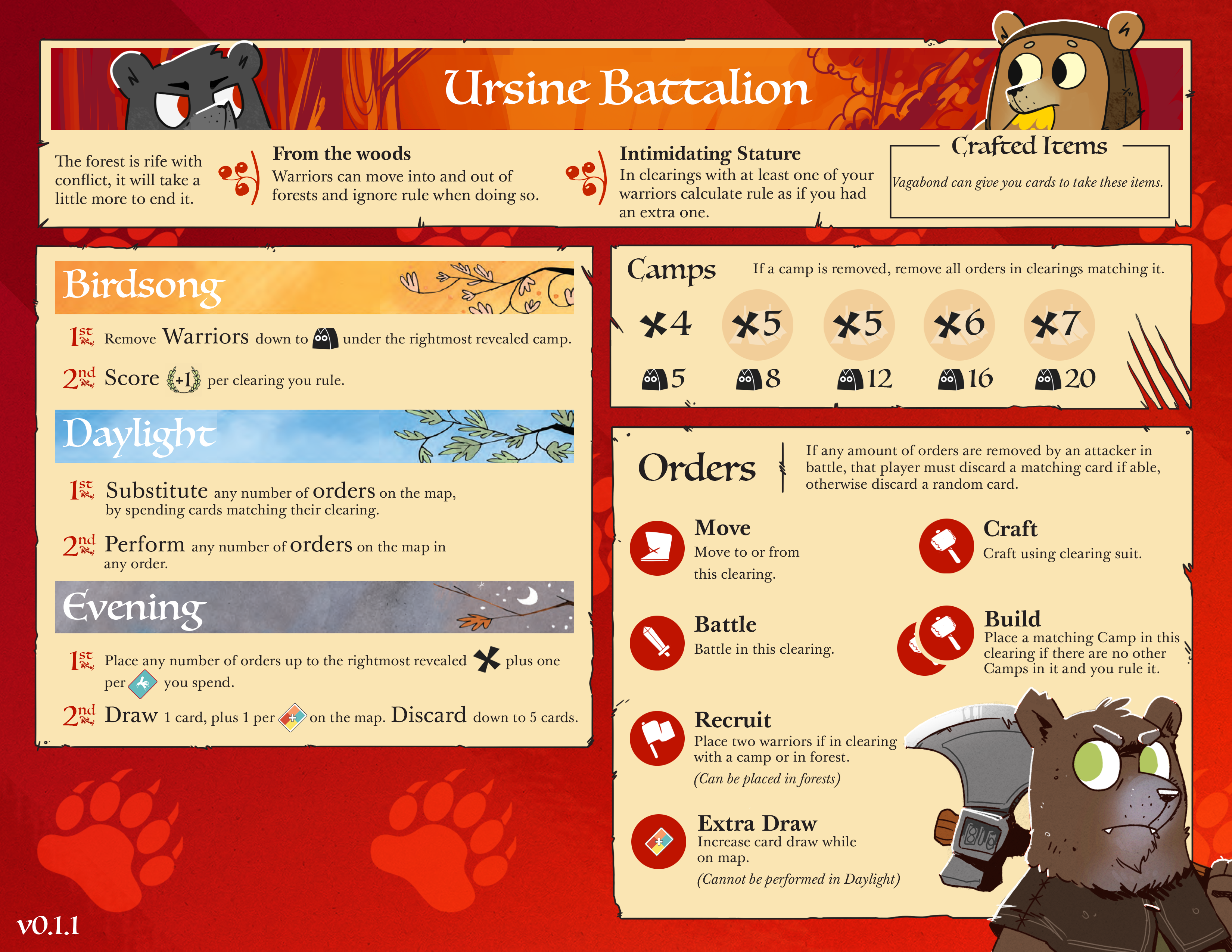 Place four Warriors in any forests without an occupant.

I'd greatly appreciate any comments on this faction as I've only had the chance to test it in solo play.

Chris Ignatov
(GMchris)
Bulgaria
Sofia
Sofia City Province
After some comments on Discord, I've made several changes (reflected in the OP), related to camp progression and number of warriors. I'm including a version in the bottom from now on.

1. Camps are no longer suited, however a new rule in Build specifies that only one can be placed per clearing.
2. The warrior limit is now higher at 20.
3. Some QoL changes like text and icons.

Kevin Ducharme
(Kevino6767)
I think it would be cool if the bears could do something with the ruins as a form of hibernation.

Maybe have the possibility to "convert" a ruin into a camp. This would challenge the vagabond.

Anjovi
(anjovi154)
Canada
Prince George
British Columbia
This might be my favorite fan faction that I've seen! The idea of having pre-choreographed moves is neat! Also, the theme of them coming from the woods is a nice touch! thematically, i can see a cool contrast to the moles as well.

I can see them working in the dynamic and theme of the game as the alliance, though being a faction that didn't start as a grass roots movement (being very localized in it's beginning), but more as one that's attempting to start from a wider, less organized network.

I'm curious if there are any historical references to draw from for inspiration (or if that dynamic i'm going on about makes any sense), but I find this interesting non-the-less.

Thanks for making this!

Why are camps tokens, and not buildings?

How likely is it for order tokens to be removed? I can see them generate a lot of points for other players unless you only place them in clearings with lots of warriors.

Chris Ignatov
(GMchris)
Bulgaria
Sofia
Sofia City Province
Kevino6767 wrote:
I think it would be cool if the bears could do something with the ruins as a form of hibernation.

Maybe have the possibility to "convert" a ruin into a camp. This would challenge the vagabond.

I was tempted to involve some "Vagabond-only" pieces, such as the ruins and the items, but I firstly I don't think it really fits thematically, and second it seems Leder has put a real effort into avoiding touching those pieces with other factions and I'd like to respect that.

anjovi154 wrote:
This might be my favorite fan faction that I've seen! The idea of having pre-choreographed moves is neat! Also, the theme of them coming from the woods is a nice touch! thematically, i can see a cool contrast to the moles as well.
Thank you for your kind words I'll be trying to get them into the TTS mod as a fan faction.

Why are camps tokens, and not buildings?

How likely is it for order tokens to be removed? I can see them generate a lot of points for other players unless you only place them in clearings with lots of warriors.
A couple of reasons for camps to not be buildings.

1. They actually were earlier in the concept (it made them easier to distinguish from the order tokens) and it made sense because a camp is a type of building after all.

2. What I noticed however is that by taking up building spots in a cluster of clearings, they forced the paw of the Marquise and any other factions that are builders to attack. The bears cannot afford to fight a lot early in the game.

3. At the same time, seeing where enemy factions set up, bears would have to try and distance themselves from everyone in the beginning if they hope to find any empty building spots.

To keep the theme of bears wanting to protect the forest going, I'll be converting the Camp tokens to Den tokens instead.

The order token spread is my biggest concern when it comes to this faction. I've been considering harsher punishments for people attacking them. You can place any Order on any clearing, and recruitments even inside of forests (some tokens have special requirements to be Executed however, such as Build requiring you to rule the clearing). Orders are also not removed if the player cant or doesn't want to execute them, so in theory you could pile up 15 points on the map for someone to just take, but Bears also have one of the easiest ways to recruit additional warriors (up to 6 per turn) as well as a fairly simple to execute scoring mechanic. This means that it's unlikely that people will be hitting the bear tokens too often (unless the bears leave them undefended).

The whole game for the bears is balancing their currently ruled land total, warrior limit and count and token distribution. I think it's totally fine to lose a risky solitary token every once in a while. In fact it might even be good bait to place an attack token on top of someone's clearing and force them to waste an attack removing it in fear of being rushed.

One rules question : When you say "substitute any number of orders on the map by spending cards matching their clearing"

I think flipping the order tokens when they are performed would help to keep track of actions, then resetting them in Evening or Birdsong

I haven't tested it yet, but it does seem quite powerful to be able to add at least 4 orders on the map every turn...

What is your feeling on this faction's balance ?
Have you had time to play test it in many configurations ?

Chris Ignatov
(GMchris)
Bulgaria
Sofia
Sofia City Province
Hey, sorry for the late response. I haven't logged in in a while. I appreciate you liked the faction enough to translate. So performing orders actually removes them from the map and back into the player's stash. So they can either be executed or destroyed by enemies.

As for the switching two orders - it means you pick one that's on the map, spent a matching card and replace that order with one from your stash, not from the map.

Balance wise - hard to say...I know they don't fare too well vs a low number of opponents. If you're facing a single one especially you'll likely not be able to do much cause your tokens can be bullied. But in higher numbers they kinda work like the Woodland Alliance - they sort of stay low and snowball if left to their own devices.

ark hane
(arkhane)
Ok thanks for clarification Chris !
During the playtest we figured out that orders had to be removed to be executed. It just doesn't say so anywhere on the board...

1st : Substitute any number of times
Spend a card to remove an order from a matching clearing and place an order in the same clearing.

2st : Perform orders any number of times
Remove an order to take the corresponding action.
A few photos from the assembled faction 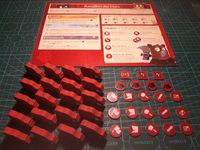 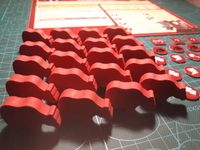 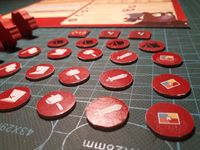 ark hane
(arkhane)
Here is the French version, with board back and tokens

Martin M
(St0l3n_ID)
Germany
Passau
Bayern
I have no particular input, other then:

Kinda dislike the bear-meeple you choose

Intimidating Statute seems like identical to the eyries "win tie" ability, but i guess it would overrule the eyrie, correct? (having one more when counting would circuumvent the "tie" in the first place, in my head at least)

I just used some wooden bear meeples I found at my local game shop
If you have a 3D printer / laser cutter, you can use this meeple instead which is a lot better.

St0l3n_ID wrote:
Intimidating Statute seems like identical to the eyries "win tie" ability, but i guess it would overrule the eyrie, correct? (having one more when counting would circuumvent the "tie" in the first place, in my head at least)
You're right
Note the eyrie power works even when no warriors are present.
But since they only have roost tokens and shouldn't leave them undefended, this situation shouldn't happen.