Quote:
Former Chinese Premier Li Peng, who became known as the "Butcher of Beijing" for playing a major role in the brutal crackdown on the Tiananmen Square student protests in 1989, has died at the age of 90.

Historians have long debated Li's role in the ultimate decision to send soldiers to clear Beijing's Tiananmen Square on June 4, 1989: Was he merely following orders from China's then-de facto leader Deng Xiaoping or did Li push Deng to make the final call?

History will likely judge that Li deserved his moniker. In May 1989, as the pro-democracy protests gained strength in Tiananmen Square, Li angrily told students at a meeting that "The situation will not develop as you wish and expect," as The Associated Press reported. A day later, he told the public in a televised address that he was declaring martial law. 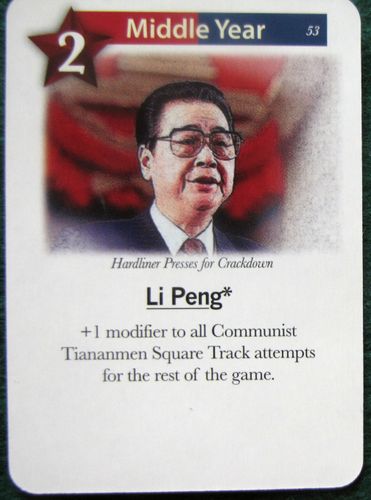 Gone, but not forgotten when the Communist player gets a +1 to his TS attempt die roll.

I guess it is true what they say, "The good die young".

"It may be doubted whether so small a number of men ever employed so short a space of time with greater or more lasting effects upon the history of the world.” — Sir George Otto Trevelyan on the Battles of Trenton and Princeton
Tamp the dirt down.

Why do sociopathic dictators love over-sized glasses so much?

C Jen
(YassWaddah)
Li Peng's political career pretty much declined after the 1989 riots too. He was the adopted son of Zhou Enlai, the much-beloved second-in-command to Mao. His highest office was Premier, like that of his adoptive father.

He lost power to economic reform-minded Zhu Rongji in the 1990s to 2001, retiring quietly to business. He was associated with the Three Gorges Dam project in central China and continued to be involved with many power and electric utility companies.

He escaped the anticorruption drive of his successors, including the demotions and purges by current leader Xi.