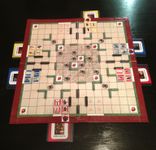 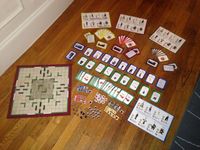 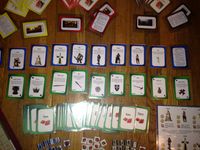 Need: playtesting
Specifically, I'm looking for:
• can the game be broken?
• are there any distinct imbalances (that don't have a counterbalance)?
• are any characters distinctly overpowered or underwhelming?
• how well does the game play with 2 or 3 or 4?
• how long did your game last?
• did you encounter any unsavory stalemate situations?
• is the game "solvable?" Do you feel there are multiple successful strategies to playing and/or winning?
• is it fun to play once? Would you want to play this again?
• do the rules read well? Did any ambiguities come up during play?

I've tested all of these elements myself and with others, so don't feel like you are being handed a glitchy game. It should be pretty solid. That said, I'd like to see how it plays without me at the table. I'm also preparing a final prototype for the Boston Festival of Indie Games in September, so if I received feedback by August, that would be immensely helpful as I could incorporate people's note into the final version that I bring to showcase

Description:
Quote:
Summer is here, which -- for the kingdoms of Feorhyrna -- means it's time to raid the strawberry patch! In all the world, no item is more sought after than the Feorhyrnan strawberry: wars have been waged and kingdoms have been lost all in an effort to possess its mysterious, magical fruit.

But that was last year (things are more civilized now); instead of war, the kingdoms of Feorhyrna have agreed to send eight champions to the royal strawberry patch to collect this year's harvest. It's first-come-first-serve, though, and there are no rules about how to divvy up the fruit...but they'll work on that next year. In the meantime, it's time to bust some skulls and grab some strawberries!

Royal Strawberries is a whimsical game of tactics and strategy in which teams of fabulous characters navigate a garden maze and fight for the fabled fruit of Feorhyrna. When the last strawberry is plucked, the game ends and each kingdom tallies up its total number of strawberries: whichever kingdom has the most strawberries -- and still has their Queen on the board -- wins!